The Biggest Production Peterbilt Ever 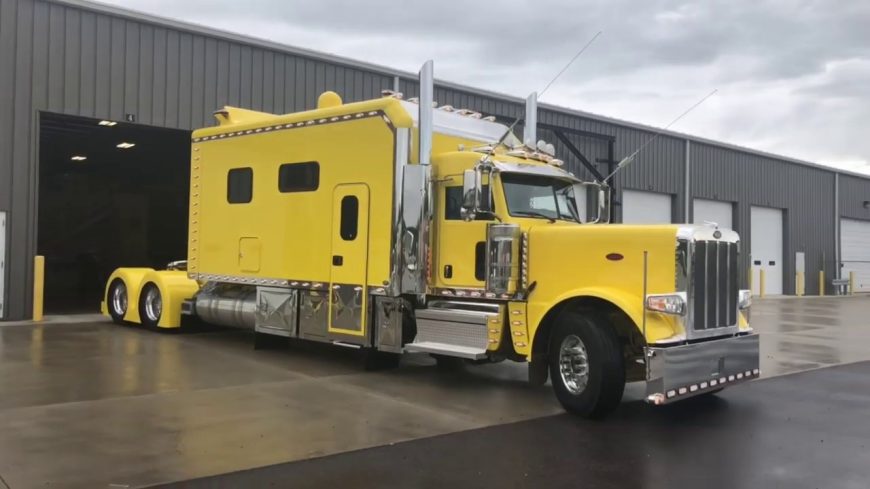 Dreams come in all different shapes and sizes. For Ruth and Chris Smith, their dream just so happens to come in the biggest production Peterbilt rolling.

That’s right, this dream truck is a hauler meant to really put a little bit of muscle behind the art of pulling a trailer. Their job is towing jet engines to and from airports for eight months of the year. With the couple of months left over in the winter, they take themselves a break. However, in between, they basically spend all of their time living in the truck.

As one might imagine, if you’re going to live in a truck, it’s going to have to probably be a pretty impressive ride. “Impressive” this Peterbilt is as it brings a lot to the table to love. Outside, the machine is really a lot to take in. Instead of a traditional semi truck, the massive cab adds another dimension to the massive nature of the machine as it rolls down highways across the country.

After we have time to really soak in all of the yellow and chrome outside, we eventually get to take a tour of the interior. This is where things begin to get even more impressive and we find living quarters that would make just about anybody comfortable. Inside, we find everything from amenities like a kitchen and a bathroom all the way to entertainment and different comfort features that are sure to make this place feel like home on the road.

Down below, we get the complete tour and hear a little bit from the Smiths themselves as they tell us exactly what it was that went into the thought behind putting together such a rig. When a machine is going to be your home, it’s definitely something that you’re going to want to put a lot of thought into. We see that idea in spades with this gorgeous hauler.