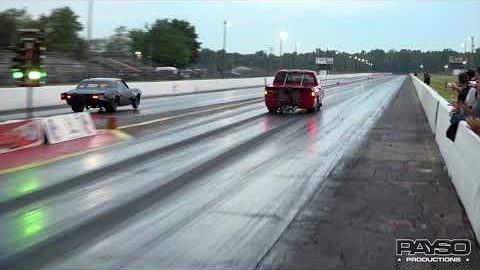 Last weekend, grudge racers from across the country converged on Milan Dragway for promoter Jay Payso’s farewell event, Motor City Mayhem 6. With some of the biggest names in the no time game on hand and traction guru Tyler Crossnoe throwing down the prep, the action was hot and heavy all weekend!

One of the biggest races of the weekend came when two worlds collided and grudge racer Bill Lutz took on class racer Chris Cadotto. With both of these competitors being known as top names in their respective niches, hype quickly built this to be one of the most talked about pairings in recent memory. Which side would reign supreme? Would it be grudge or class? Would it be blower or turbo? Would it be car or pickup?

The two lined up and rolled carefully toward the staging beams, stopping side by side in the prestage beams before slowly and carefully bumping into the beams. As soon as both rides are staged, the tree drops and the hulking blown pickup driven by Cadotto pulls out to an early lead, putting about half a truck on the boosted Camaro of Lutz. However, as they near mid track, the turbochargers on the Camaro do what turbochargers do and begin to build a strong head of steam, which doesn’t bode well at all for the blown Dodge Ram in the other lane.

Just as quickly as he’d fallen behind, Lutz pulls ahead and stretches out a two+ carlength lead by the time they cross the finish line, earning the win light and bragging rights for all of the grudge racers on the property. Cadotto fought valiantly, but it just wasn’t to be on this day thanks to that wicked top end charge of Lutz.

We hate to see Payso step away from the promoting game, but events outside his control prompted racers to boycott Milan Dragway just a few short days before his event, which left him in a tough spot. I can certainly understand his decision and will always support Jay and his family, I just hope he comes back to the game soon!