BMW 335i Plows GTR at a High Rate of Speed 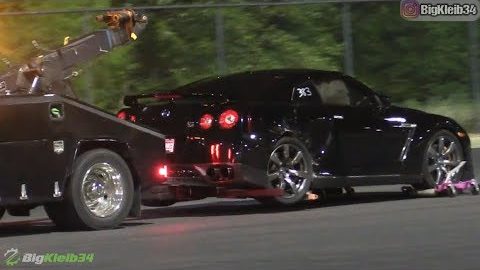 We would like to think that while racing, things are within our control. Normally, it’s only the fastest cars on the property that have issues and go sideways, right? There would be no way that cars running the 11.0-second index at Street Car Takeover could end up crashing. Think again! When racing, anything could happen at any time. It doesn’t matter if we’re looking at a Pro Mod or a daily driver.

This time, it’s a BMW 3-series that ends up getting tangled up in issues. The spiral ends up taking a Nissan GT-R down in the process as well. It seems like an issue that neither driver could have controlled. Sometimes, there’s room to make a recovery. If traction is lost and a car goes sideways, good driving could possibly help bring it back. If a tire goes down like we see here, though, especially at the big end of the track, it’s pretty much a foregone conclusion.

It almost impossible not to cringe as this luxury performance machine gets sideways and, as it seems to be out of reach for the driver to save in the situation. The car careens straight into the GT-R in the next lane over. It almost makes a 90° angle as the high-end cars join together as one. All of that inertia certainly comes to a stop in a hurry.

After watching the video below, I think that we can all agree pretty much that both cars are probably totaled. It’s really a shame to watch someone’s pride and joy go down like that, especially in a situation that insurance companies won’t touch. At the end of the day, it’s the risk you run when you head out to the race track. Luckily, no injuries were reported following the incident. This one certainly could’ve been much worse. – BigKleib34

« What Ever Happened to the Ford GT90 and its Attempt to be the Fastest?