If you have never seen a boat docking competition, these guys get incredibly fierce, ...

If you have never seen a boat docking competition, these guys get incredibly fierce, throwing their vessels in reverse at full tilt after coming in hot to get the best time possible and beat out the other participants.

This time, we check out a boat docking competitor who didn’t necessarily stick the landing quite right and ended up causing just a little bit of damage to his surroundings and possibly some to his boat as well. After throwing the boat in reverse, it zoomed it’s way into the slip, but instead of going straight, it jetted straight into a piling.

Now, normally, smashing into a piling it isn’t that big of a deal but this time, as the boat is left in reverse at full throttle, it does some big-time damage, sending the wooden pole into the water as it is cracked in half, never to be seen from again. That is going be one expensive fix for the marina in question.

Check out the video below that shows this attempted boat docking competition run that doesn’t end exactly how the captain of the ship would have liked. Perhaps it’s time to go back to the drawing board and figure out how to right that wrong for the next competition.

Now this is how you dock a boat, serious skills 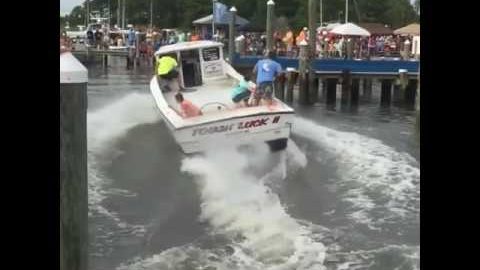