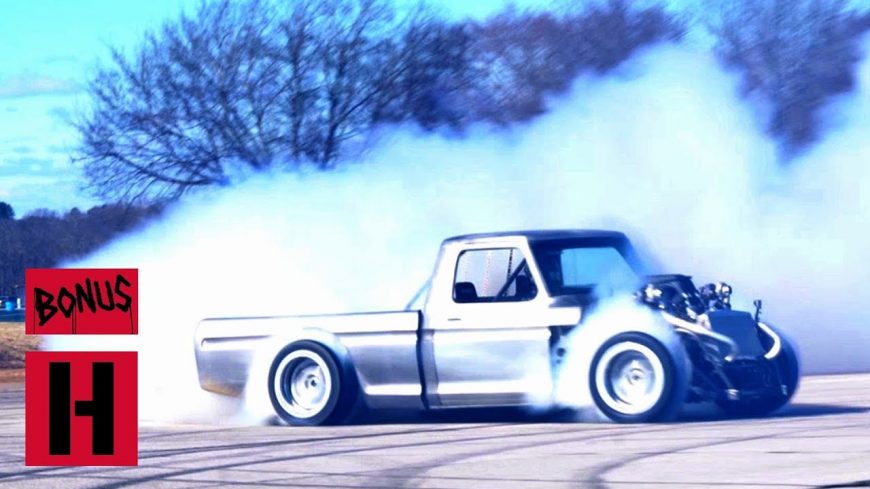 While there is zero doubt that drift legend Ken Block can slide behind the wheel of any car and automatically do cool stuff, when it comes time to film a huge project like Gymkhana 10, Block likes to make sure he has a solid feel for each vehicle he will be wheeling. This year, Block and the Hoonigan crew brought out a brand new build for the 10th edition in the epic urban drift assault series, one with a different combo from anything Ken had ever driven: The Hoonitruck!

While at first glance the Hoonitruck may seem to be a single-cab version of the Hoonicorn, the twin turbocharged all-wheel drive Mustang that became in instant sensation when it debuted in Gymkhana Seven, but there are some significant differences. As most of you will remember, when the Mustang debuted, it was powered by a snarling naturally aspirated powerplant that made 845 horsepower. The car then reappeared for Climbkhana, where Block drifted his way up Pike’s Peak in the newly-twin turbocharged Hoonicorn V2 which cranks out 1,400 horsepower from the force-fed V8.

The truck, however, doesn’t quite have the same power as the ‘Stand. Luckily, in Ken’s more-than capable hands, it doesn’t really show. Powered by a twin-turbo V6 akin to that found in the previous generation Raptor, the 1977 Ford F-150 does still crank out a respectable 914 horsepower, which is more than enough to send all 4 tires into instant tiresmoke at the drop of the hammer.

To get a feel for the truck’s unique handling characteristics, Block needs nothing more than a skidpad and some barrels to use as targets. As you can see in this balls-to-the-wall test session, Ken has little trouble adapting to the truck and learning exactly what it wants and needs to be driven with the same precision shown behind the wheel of the other 4 rides featured in Gymkhana 10.

« Vengeance Racing Delivers Toys For The Children Of Atlanta!