Boosted GT Makes A Solid No Prep Pass In His New Mustang! 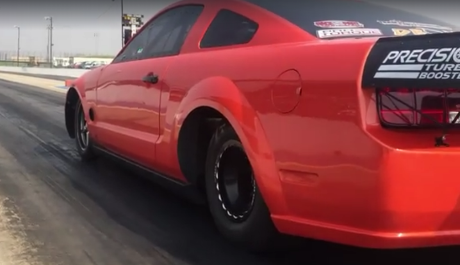 Street Outlaws has one last racer flying the small tire banner, and while he hasn’t been on the list for a while, he’s been able to take out most every other opponent on small tires and even a few on big tires while riding on 10.5’s in his familiar yellow Mustang. However, a while back, Boosted announced that he was building a new car, almost certainly due to the years of abuse that had surely worn his faithful New Edge chassis out. It was rumored for a while that Boosted would be making the transition to big tires on the new car, but while it certainly looks like a big tire may fit under the new car, for the time being it looks like Boosted will continue to fight in the name of small tires.

Boosted’s new orange S197 chassis looks to be an updated version of the car that made him an underground celebrity in the world of internet forums and low-key street racing long before there was even a thought about a television show about it. The most obvious change is in fact the choice of color with Boosted dropping the retina searing yellow and opting to spray the new car an equally-attention grabbing orange. I have no idea what lies under the hood of his new hotrod, but knowing what I do about his past combinations, it seems safe to assume there’s yet another small block Ford powerplant providing power with a little help from a turbocharger hung out in the front grill opening. The beautiful thing about this combination is that it can be built to produce gobs of horsepower while living a long and happy life as long as the tune is happy.

To break in the new car, Boosted headed to Wichita Falls, where he laid down this test hit on the facility’s unprepped surface, showing how sketchy the car is on small tires, but that it still is capable of laying down a solid run as long as Boosted is willing to keep his foot in it and is able to keep the rear tires at least most of the way planted. There’s still some work to be done, but make no mistake, he will get the car dialed in and ready to go to battle whenever the time comes!

« RSX gets IMPOUNDED with NO WHEELS, Car Destroyed