As the calendar rounds the corner toward the winter, the racing season seems to be ...

As the calendar rounds the corner toward the winter, the racing season seems to be slowing down a little bit. It might even be wrapping up in many areas of the country. In Ennis, Texas, we would see the final installment of the third season of No Prep Kings. Even though the race is coming to a close, there were still several storylines worth following. Of course, we had our eye on the race for the championship. Progress is still being made outside of that picture as well, though.

One attraction that drew our interest at the event was Boosted GT‘s new look. As we all know, Boosted has become known for his bright yellow machines. With both a New Edge and SN95 Mustang clad in the color, it kind of became a part of his brand. That doesn’t seem to be the case any longer. With his latest machine needing a facelift, Boosted decided to go another direction.

The car outfitted with the body of a Shelby GT500 was already a draw. however, with a couple of bangs and bumps here and there, it was clear that it could’ve used a little bit of TLC in the looks department. that was exactly what Boosted decided to throw at the car before the Texas event. On location, we would find that the machine now took on a complete bright red paint job, emulating a shade that the car would’ve come with from the factory.

Down below, we get the opportunity to catch up with the new look Boosted GT along with all sorts of other action. As always, no matter what way we look, there is a ton to sink our teeth into at No Prep Kings. This time, we find that the National No Prep Racing Association delivers us even more action to love. Unfortunately, the season has drawn to a close. We’re sure that next year is going to have even more insanity to show, though!

Boosted is Back with Big Tires, Ready to Stomp Out the List 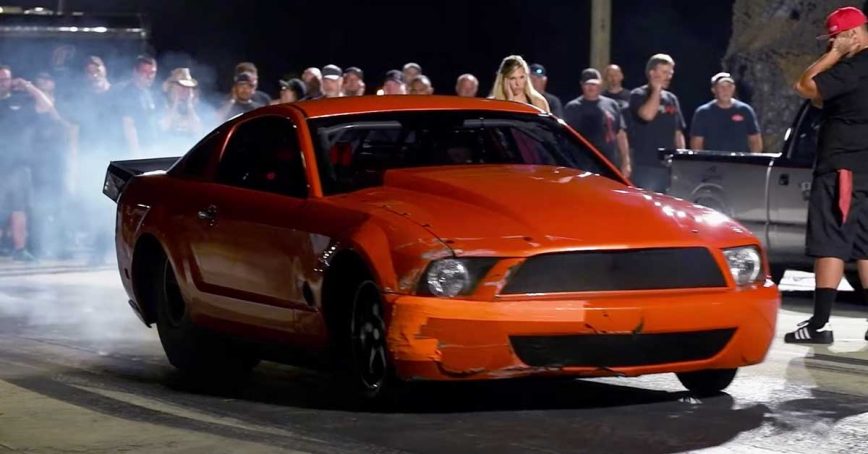