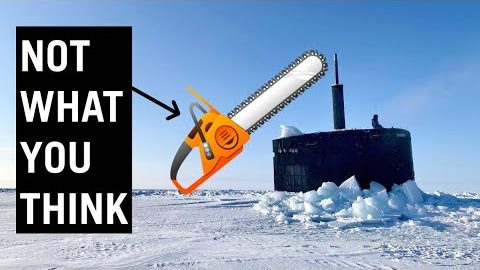 We’re going to go out on a limb here and say that the majority of people, mechanically inclined or not, probably don’t know all that much about how submarines work. Most of us realize that they operate under the surface of the water and when the operator chooses to do so, they can be brought back up to the surface, obviously.

In most cases, submarines will come back up to a liquid surface. However, every once in a while, a submarine will be asked to go above and beyond. Instead of making its way back up through the liquid water, it will be asked to emerge ahead of the ice. However, even though it might seem like a submarine has a powerful structure made out of a rigid material, it’s not always as easy as just smashing through the surface.

Instead of just blasting through the surface of the ice, there’s actually an entire process that goes into properly being able to bring a submarine to the surface in these conditions. Let’s just say that it’s not all machine labor when it comes to carrying out this task. Instead, human beings sometimes have to remove the ice from the top of the submarine by hand for everybody to be able to make it out safely. This might even involve the likes of something like a chainsaw.

Knowing this is actually slightly terrifying. What if the captain can’t find ice thin enough to break?

Down in the video below, we get to dive into how exactly an icebreaking submarine works. Just when you thought you had that perfect piece of trivia knowledge to pull out to entertain the crowd, along comes your new knowledge of submarine ice breaking.

« Firing up Saddam Hussein’s 38.8L Tank Engine is a Rather Unique Project, 1st Start Up After 28 years!