Firing up Saddam Hussein’s 38.8L Tank Engine is a Rather Unique Project, 1st Start Up After 28 years!

Firing up Saddam Hussein’s 38.8L Tank Engine is a Rather Unique Project, 1st Start Up After 28 years!

One of the beautiful things about the automotive world is that power sources can come ...

One of the beautiful things about the automotive world is that power sources can come from an abundance of different engines or motors. In any given project, when popping the hood, one might find just about any engine. In fact, even those who strive to be different will sometimes find that their project might share a couple of features in common with another person’s project.

For those who are looking to build something that is entirely their own, though, we think that we have found just the engine that would suffice. We might be going out on a limb here but we would be so inclined to say that there aren’t very many machines out there that are powered by the likes of a tank engine. However, if one were to be able to procure the engine featured in this video, they would have just that.

I’m not going to lie and say that we had the logistics figured out quite yet or anything like that. Anybody who has ever put together or thought about putting together a project is probably wondering what they would mount this thing in if they had it. However, a cohesive plan or not, it’s still pretty neat to watch the engine roar to life.

By following along with the video below, we get to witness quite a unique experience. This massive tank engine is truly a sight to behold just sitting on the stand. Being able to hear it start up and throw us a couple of revs is really adding to the creative juices that we have flowing and wondering what to do with this monster. Another interesting feature of this engine is that it was found in a tank that belonged to one of the evilest people in the world, Saddam Hussein.

Perhaps, the most interesting part is truly getting to hear what the sound is like. It’s kind of hard to put a finger on exactly what the note of this 38.8 liter V12 sounds like. 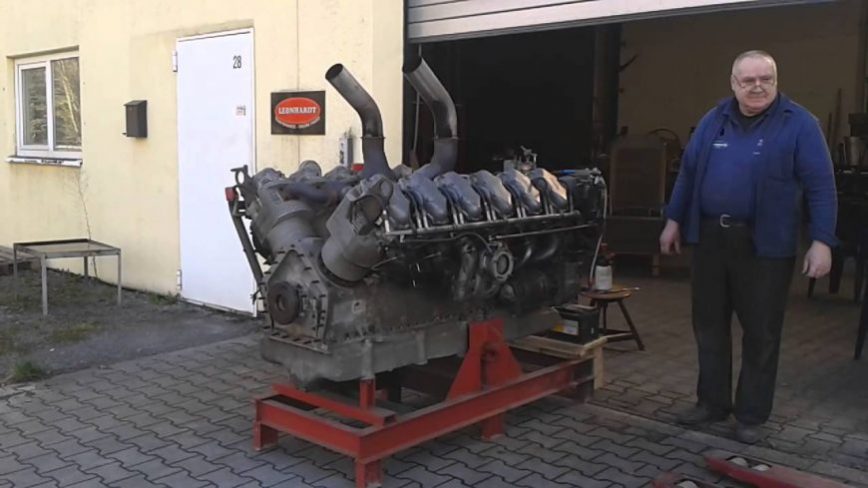