This is something we can say we’ve never seen, and it’s pretty dang cool! ...

This is something we can say we’ve never seen, and it’s pretty dang cool! Thanks to requests in the comments of their other videos, the Warped Perception channel decided to take a small rocket motor and see if it will burn underwater and what happens if it does ignite, all captured in glorious extreme slow motion.

Once the testing chamber – an old aquarium with a small crack in it – is secured, the first thing to address is how to mount the motor. All that is needed is with a simple wire rig, wrapped tightly around the motor to hold it in place and then attached to the sides of the tank. Then the motor has to be waterproofed so the propellant doesn’t get wet before the test and ruin the fun before it even begins.

With everything in place, it’s time to hit the trigger and watch what happens when the motor is fired, and thanks to the high speed camera, we get to see it all in stunning detail! From my admittedly limited understanding of how rocket motors work, I have come to the conclusion that the motor still fires underwater because the fuel packed inside it has it’s own oxygen, allowing it to burn even if there is no oxygen present in the atmosphere around the motor. Warped Perception had previously burned a rocket motor inside a vacuum tube and it burned there too, so that’s the only logical explanation.

Possibly the coolest part of the test was when the motor popped the ejection charge – a small explosion that kicks out the parachute when the motor is used in a model rocket. The explosion caused the aquarium to shatter, sending water and glass in all directions after the fuel was consumed. That moment, caught in slow motion, was amazing to watch!

This is What Happens When Magma Meets Water 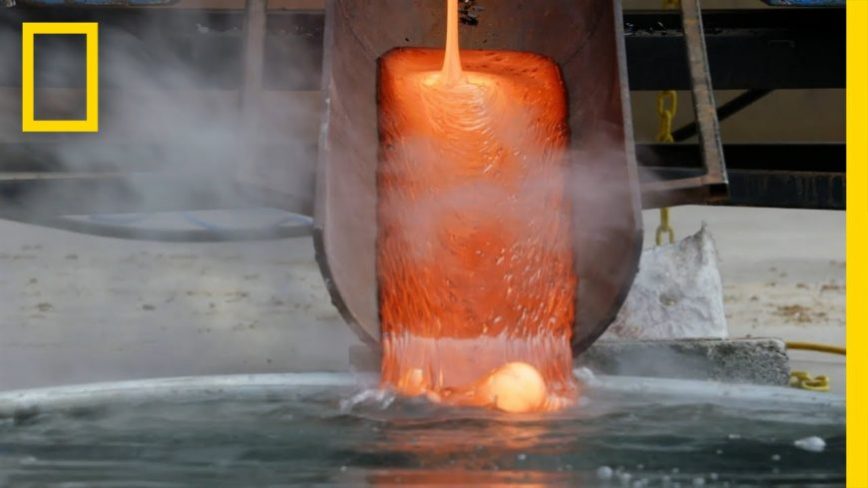