Can a Mustang be a Sleeper? This Notchback Says “Yes!” 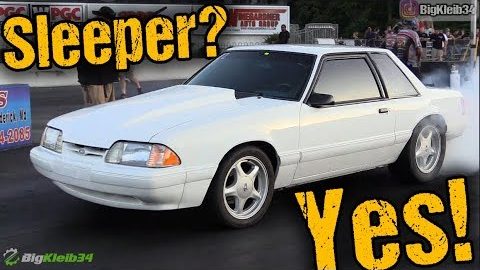 There is a fine line to be drawn between an actual sleeper and somebody trying to get clicks on YouTube. It seems like this term is one that has been thrown around more and more in recent years. After all, sometimes, it can be hard to file a Ford Mustang into the category. They were built to go fast, after all. However, we have finally stumbled upon a car that might just be able to bring that “sleeper” title to the model.

Sure, on the outside, the car does have a couple of hints that maybe the driver likes to take it on some spirited rides. It does have a small cowl hood in the front and a nice and sticky tire on the back. However, outside of that, there isn’t much to indicate that it’s quick. In cases like this, we don’t like to count the parachute. After all, it is a safety requirement and the car won’t require it on the street. However, even with the parachute accounted for, the car is a lot faster than most would expect.

Via the NHRA rules, a parachute is required once a car reaches a 9.99-second quarter mile or 150mph, whichever comes first. Naturally, when looking at this car pull up in the lanes, maybe it would appear to most as if it’s about to crack into the 9s. Just imagine our surprise when we eventually learn that the car has broken into the 7s, all while sitting on factory appearing pony wheels.

There are no beadlocks to be found. There’s no 15-inch wheel conversion. There isn’t even a wing on the back or any loud exhaust. Instead, what we have is an incredibly clean, stock bodied notchback Mustang. The car doesn’t make a ruckus when it pulls up to the line. However, that doesn’t stop it from absolutely leaving jaws on the floor. To top it all off, the machine is powered by the most unlikely of powerplants. That’s right, it’s powered by Ford’s modular 3-valve platform.

Check out the action in the BigKleib34 video below that takes us to Street Car Takeover in Maryland. This machine was certainly doing its diligence to break out the wow factor!

« Take an Inside Look at How Yamaha Engineers Propellers