Can you make a working airplane out of KFC buckets? 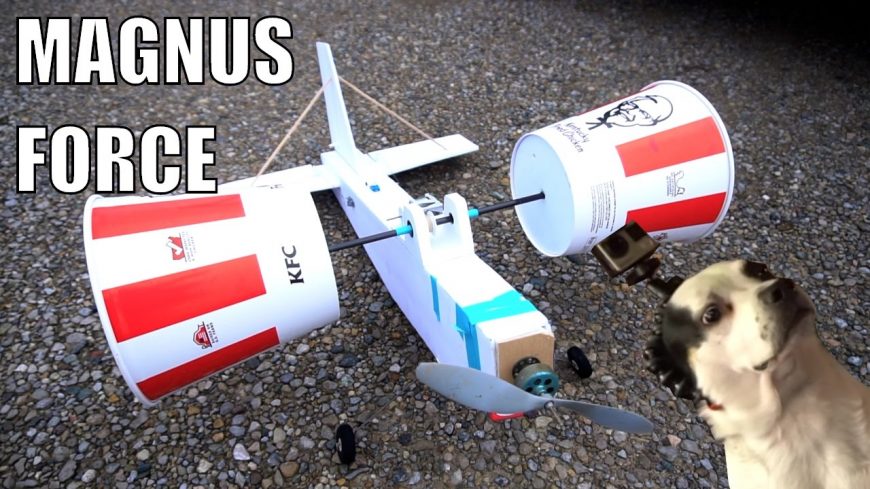 Boys and girls, it’s time to science! Today we’re going to visit with YouTuber PeterSripol in his workshop, where he’s building something that makes absolutely zero sense, except scientifically of course!

The Magnus effect is defined as the force exerted on a rapidly spinning cylinder or sphere moving through air or another fluid in a direction at an angle to the axis of spin. This force is responsible for the swerving of balls when hit or thrown with spin. For an easy visual, think about soccer players kicking the ball with spin that causes the shot to “bend”, instead of flying with a straight trajectory.

There’s a whole channel on YouTube dedicated to dropping balls of different sizes and styles from dizzying heights. With a little back spin applied, these balls fly hundreds of feet away from where they would land without spin, giving you a great visual of the effect in action.

This particular video, though, takes things in a different direction, applying the principal to flight, as in using it to generate lift to help an airplane achieve flight. Of course, risking human lives to try this idea on a full scale is a terrible idea, so Peter decides to build a radio controlled plane equipped with rotating cylinders – in this case, those trademark buckets from KFC – instead of wings. The idea seems almost stupid… keyword being almost, because with a little tweaking, you’ll see it actually does work.

Peter spends what has to be a few days working out the bugs, but eventually does find the right balance of speed and weight balance to build a plane with KFC buckets for wings that is capable of reasonably controlled flight. Yes, it looks as ridiculous as you would expect, but there’s no denying that it does, in fact, work. Science for the win, right?!

« Breaking: A Wild Road Rage Incident In Brooklyn Between Two Drivers Is Like Something Out Of A Movie.