Check Out The Level Of Detail On This RC Big Rig

Check Out The Level Of Detail On This RC Big Rig

We get a lot of comments and messages from you guys out there in the Speed Society ...

We get a lot of comments and messages from you guys out there in the Speed Society Nation about radio controlled projects. Most of them are about projects built to be ridiculously fast, but a lot of you also either build or find videos of RC builds that are insanely detailed, meticulously recreating full-size vehicles in scaled down format. This video is definitely the latter of the two, and man is this thing COOL!

This scaled-down Scania 113 big rig is as intricately detailed as any RC project I’ve ever seen. Just looking at the rig sitting on the workbench, it’s immediately obvious that the builder paid extreme attention to detail. From the paint to the badging to the textures and finish, this thing literally looks like an actual over-the-road rig, complete with a tarp over the load on the trailer and everything.

However, that’s just scratching the surface. With the transmitter powered up, the builder starts to flip switches and the truck starts to come to life. There’s an accessory on board that makes the truck sound like it’s powered by an actual Diesel engine and even lights inside the cab that lend the rig such an air of authenticity. The headlights work, as do the taillights and even the running lights down the side of the trailer. But even these details aren’t the coolest part of this build. To see what, at least in my opinion, takes this model to a whole new level, we have to look closely at the fifth wheel and the trailer itself.

At the rear of the truck, where the trailer and truck join, you’ll find a fifth wheel. This is the same type of setup used in full-sized rigs, and it’s used to securely join the truck and trailer together for transport. This rig actually has a servo to lock and unlock the kingpin, allowing the operator to hook and unhook the trailer, all without laying a hand on the rig. There’s even a motor that pushes the trailer’s landing gear down so it sits level when it’s unhooked.

That, ladies and gentlemen, is way cool!

Wife vs Lifted Truck... Someone's Sleeping on the Couch Tonight 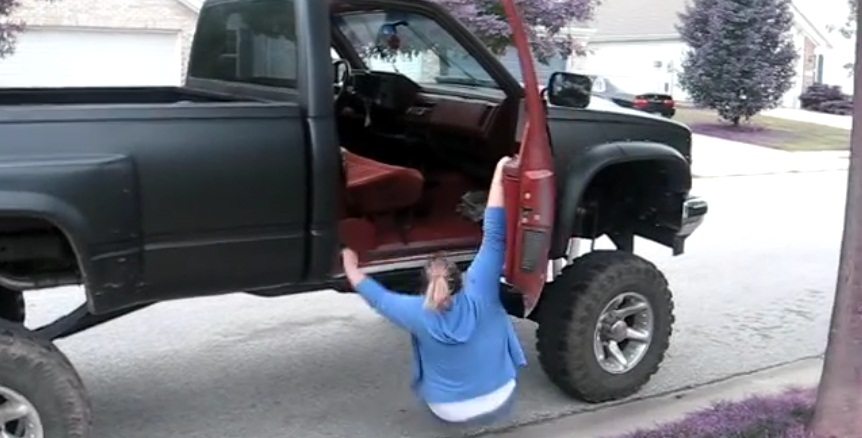