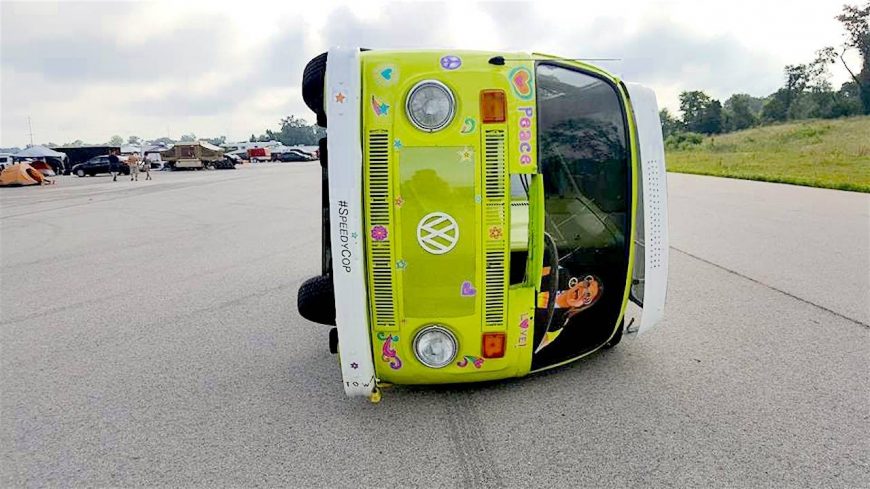 This will be the coolest thing you see today, I can almost guarantee it. We’ve seen upside down cars. We’ve seen boat cars. We’ve even seen helicopter cars. But we have never seen anything like this. The Trippy Tippy Hippy Van is exactly what it sounds like it would be, a sideways Volkswagen van, complete with flower-power motif and enough craziness to keep people gawking for days!

The van, which is actually a lot safer than it looks once you find out the steps took to ensure driver visibility and safety, isn’t the fastest ride on the road course, but it’s definitely going to draw the biggest crowd anywhere it goes.

The secret to making this work is that the van itself is actually just the van body wrapped around a VW Rabbit. While the van has been pretty well chopped up, but it’s still vintage VW and looks the part. Meanwhile, the Rabbit underneath does the actual work! The roof and undercarriage had to be trimmed away to make windows for the driver to see all around, since van does see a good bit of time on the road and the racetrack. However, instead of just leaving holes or putting in clear windows, the team behind the build had custom see-through one-way vinyl printed to at least make it look like the roof and undercarriage are intact.

We aren’t really sure what somebody will come up with next to try to top this, but they certainly have their work cut out for them if they think they’re going to be able to come up with something cooler than this thing!