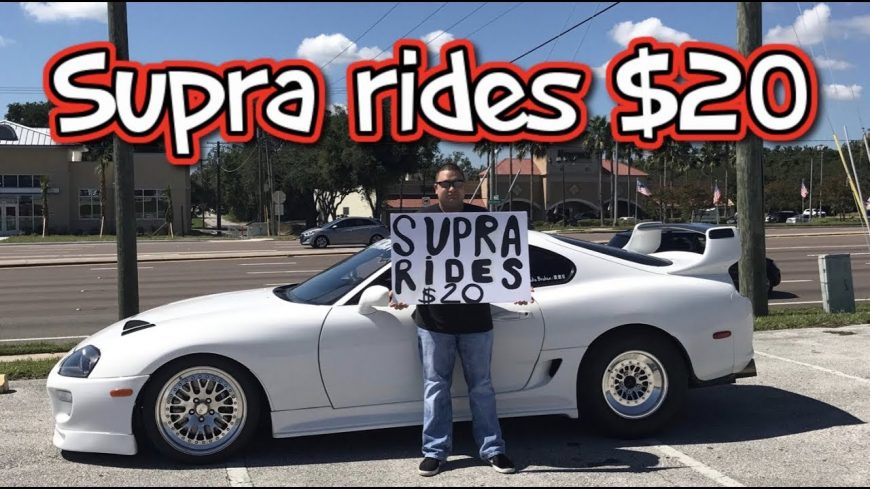 As a car enthusiast who thinks that he has a pretty good grasp on the community, I think that most people can’t help but slap the  Toyota Supra on their list of some of the most respected cars in the game. The Supra has really earned its spot as one of the greatest machines to put power to the ground when it’s done right. The car definitely comes from humble beginnings, but as the generations continued to evolve the machine, it has definitely come into its own, becoming one of the staples of the performance community. Just imagine someone who has no access to such a car being given the chance to go for a ridealong in a prime example of the machine.

This time, we ride along with Sik2jz as he takes his turbo Supra to a local shopping center and sits on the side of the highway with a sign promising rides in the Supra for a cool $20. If you don’t have a buddy with one of these things who is willing to take you on a ride for free, I would definitely recommend taking someone up on this offer should you ever see them hanging out on the side of the road with such a deal going down! $20 isn’t much for an experience that will last you a lifetime… Kids, don’t get in the car with a stranger, though.

Check out the video below that takes you on the scene that shows you what these people think when they’re exposed to over 1000 hp of turbocharged power. With a couple of these people who claim that they’ve never really felt any sort of real power, that has to be an incredible culture shock! If you saw a person standing on the side of the road handing out rides for $20, would you stop by and see what all of the hype was about?

« You will Never Split Wood the Same After Watching This!