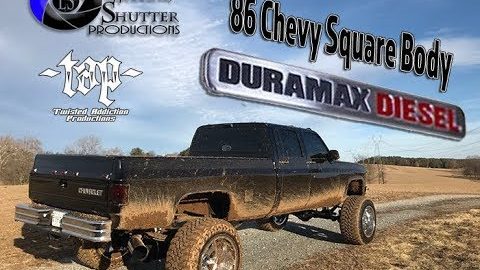 Two of the best things to ever roll of Chevrolet’s assembly lines are the square body pickup and the Duramax diesel engine. Of course, as most of us know, these two were separated by a couple of decades, with the square bodies rolling into America’s heart in the mid-’70s through the late-80’s and the Duramax not going into production until the early 2000’s.

The first LB7 was the first Duramax engine produced in the lineage and is a workhorse of an engine. The turbocharged V8 checked in at 402 cubic inches and made 300 horsepower and a stout 520 ft/lbs of torque straight off the showroom floor. It was the engine of choice for most Silverado and GMC Sierra models wearing the HD badge, though both were also available with a gas-burning big block as well.

The square body, Chevrolet’s third generation of the C10 line, was an instant hit among the truck-buying public thanks to the timeless styling that is still hugely popular among enthusiasts. In production from 1973 through 1987, the third-gen pickups were available with a wide assortment of configurations, but the only diesel options were ridiculously underpowered, making just 120 horsepower and 220 ft/lbs of torque from the Oldsmobile powerplant and 130 horsepower and 240 ft/lbs of torque from the Detroit version that was available.

Combining these two beloved pieces of Chevrolet goodness would be cool in any configuration, but the guys who built the truck featured in the video below went a little farther, jacking the suspension with a full custom setup and a great looking wheel/tire combo. They take the truck out for some nice close-up video before hitting the backcountry and getting it all muddy, which is exactly what big trucks are really for right? Props to the builders – West End Motors – and the team that put the video together for a killer look at this awesome build!

« Alex Laughlin Wins Lights Out 10 On A Holeshot