Top Gear‘s Chris Harris had an opportunity to climb behind the wheel of Aston ...

Top Gear‘s Chris Harris had an opportunity to climb behind the wheel of Aston Martin’s most powerful offering in the company’s history. The Vulcan – named after Britain’s legendary bomber aircraft – is nothing short of pure racecar wickedness. Sleek and low slung with a massive airfoil on the back to keep the rear end planted at speeds, it looks like something out of a futuristic racing video game. Rest assured, though, this car is very real and very cool!

Boasting 820 horsepower from its V12 powerplant, the Vulcan blasts to 60 MPH in less than three seconds from a standing start and accelerates beyond 200 MPH up top. But this Aston is more than neck-snapping acceleration, as it’s built to rip through corners as well as any car on the planet. Harris, who has certainly wheeled some of the fastest cars ever built, heaped praise on the Vulcan’s nimble handling, and at one point admitted the car was handling everything he could give it and pushing him to the point of being unable to talk and drive.

To demonstrate just how insanely fast and agile the Vulcan is, Harris takes one Formula 1 winner Darren Turner, wheeling the 573 HP Aston Martin Vanquish S, the fastest road-going Aston available. Harris spots Turner a full 20 seconds, sending the pilot a half mile ahead, before methodically, albeit brutally quickly, reeling him in before the Vanquish can complete the single lap race. 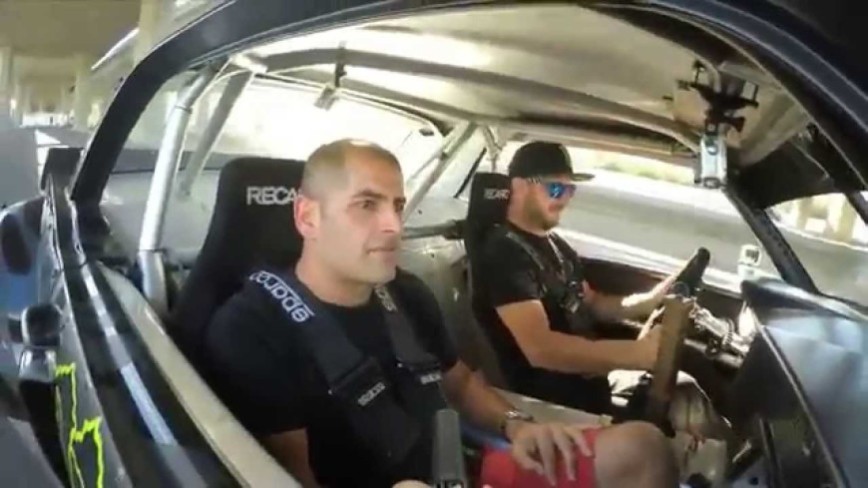