Clark Griswalds WAGON -vs- New Camaro – Who you got? 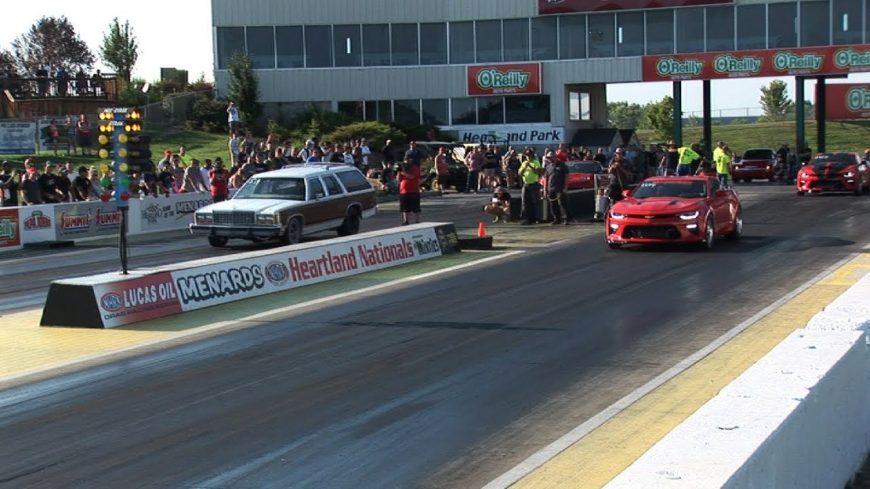 So what happens when you strap a turbo onto a big ol honkin station wagon and hit the quarter mile? Well you dang near shock the world and give a mid-10 second Camaro a run for its money!

I don’t have any concrete info on what’s under the hood of this wagon, but it sound suspiciously like a turbo LS, and judging by the numbers it puts up out the back door it would be a logical conclusion to assume that’s the owner’s powerplant of choice. We know they’re readily available and reasonably cheap, and you can boost the crap out of a stock bottom end LS without having to really dive into the engine itself. This makes the platform attractive to gearheads far and wide, especially when you find an aluminum block combo and shave a few pounds off the nose of your car.

While it doesn’t look like weight savings were much of a concern with this wagon, the car still moves out once it gets rolling clocking some pretty impressive trap speed for a wagon that likely weighs as much as a full size pickup.

However, the Camaro in the other lane isn’t just rolling over and taking an L. The great looking red f body doesn’t look or sound stock either and lays down a pretty solid elapsed time too, but of course, you expect that from a car like that. You just don’t always expect a big boxy station wagon to put up sub-11 second quarter mile times at nearly 130 MPH. Of course, that the joy of building a low-key sleeper that neither looks nor sounds like it’s packing the power to run out of the life of most any stock car that it might run up on while cruising to the grocery store and back.

« Back Road Car Show Turns Into a Burnout Contest!