Cleetus McFarland Tries to do a Burnout in the New C8 Corvette, Gives His Thoughts

Cleetus McFarland Tries to do a Burnout in the New C8 Corvette, Gives His Thoughts

It’s at the point in the lifecycle of the latest Chevrolet Corvette that ...

It’s at the point in the lifecycle of the latest Chevrolet Corvette that we’re finally getting to see what these things can do. Just recently, it looks like Chevrolet has been inviting some influencers to try it out and see what they think. When it comes to those who would have a valuable opinion on the matter, Cleetus McFarland seems to fit the bill perfectly. After all, he does have quite the collection of Corvettes, himself.

One of the things that we enjoy about Cleetus’s approach is that it’s not exactly like all of the other car reviewers. Sure, he does have a professional attitude. He even has a well-rounded knowledge of what to look for and what people are probably going to want out of the car.

However, out of all the people reviewing the C8, he’s probably the most concerned about how to do a burnout. I’m not sure about you, but that’s definitely something that we’re looking for with such a machine. After all, we’re talking about the CEO of freedom here. Sending some smoke in the air is going to be pretty high on the list of priorities with a car like this.

Now, McFarland was careful with the car as it wasn’t his own. However, he does say that he has a C8 on order. In addition to the bit about the burnout, we also get a reaction to exactly what the car is offering. Oh yeah and we still get to see him ripping around and pushing it a bit.

It’s going to take a minute to digest this model as it’s a completely different beast than any other Corvette. It kind of rearranges how one would even approach the car. The platform does make a pretty big leap with each generation. However, it’s never made this big of a change. 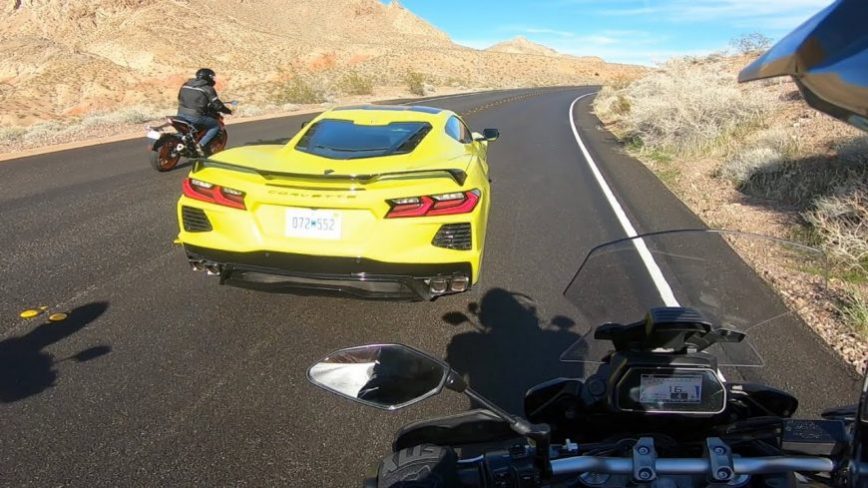