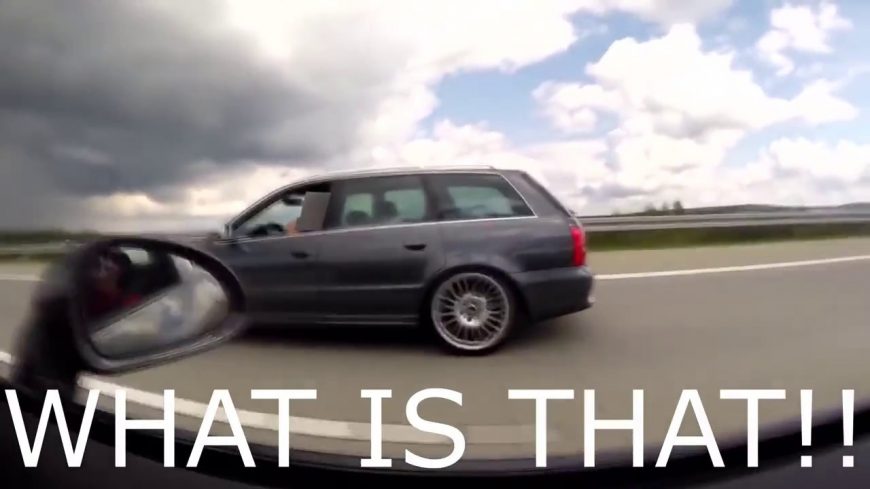 There aren’t too many cars in the Audi lineup that would usually qualify as a sleeper, with most of their offerings being pretty respectable in the horsepower and handling department. However, when it some to baiting arrogant exotic owners into making fools of themselves, there in at least one Audi that can lull them into a false sense of security with it’s looks, then drop the hammer and really hurt their feelings: the RS4 Wagon.

The RS4 wagon came from the factory with a respectable 260 HP V6 engine that offered a nice mix of performance and fuel economy. Obviously, the owner of this one has decided to focus more on the former than the latter. While we don’t have any details about the wagon itself, we can assume that the factory biturbo system has been upgraded considerably with larger turbos, as well as a tune and maybe some upgraded cams. We know the car has some kind of upgraded exhaust because the guys in the Porsche make mention of how loud it is at the very beginning.

They decided not to heed the warning of the loud muffler, which certainly doesn’t always mean there’s massive power flowing through it, and decide to pick on the little wagon as it enters the freeway. That was a big mistake, which they found out when the wagon practically pushed the Porsche down the road before swinging over to the emergency lane to pass all the way on the outside. Not only did the RS4 make the pass, it made the pass with relative ease. The two cars slow down door to door for a straight up highway pull and the wagon once again runs completely out of the 911’s life, leaving the driver and passenger speechless in it’s wake.