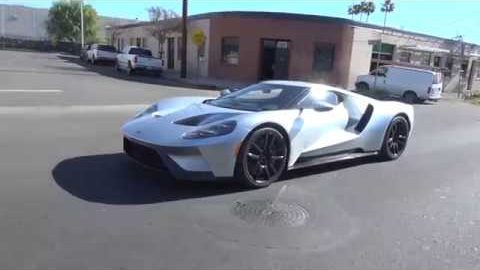 Ford’s new GT has become one of the most talked-about supercars of the day, making waves at every turn it seems. While most of the attention is positive, the car has been the center of a bit of controversy, but we aren’t here to discuss that, at least not today.

Television and movie star Tim Allen is a gearhead at heart, something many Home Improvement fans likely already know about the iconic comedian. While many of Allen’s the cars that appeared on the smash hit television series were classic muscle cars, his collection also includes some modern exotics and supercars, such as one silver Ford GT.

When Allen took delivery of his GT, he put his personal production crew from the Tim Allen YouTube channel to work capturing some great detail footage of the car as it was being unloaded, as well as joining him for a ride in the car to capture his initial reaction to the highly sought-after GT.

Tim’s impressions of the car are basically consistent with what we’ve seen from others taking their GT’s for a spin: it’s impractical, but a blast to drive. As Allen points out, the key has a special spot in the dash, but there isn’t room for the paper tag attached, really illustrating the complete lack of storage in the car. But in the same breath, we have to point out that if you buy a Ford GT expecting practical storage space, you probably should have read the brochure a little more closely before you placed your order.

Allen sums the GT up rather succinctly when he says that it’s the closest thing he’s driven to a race car for the street. With the twin turbo EcoBoost V6 cranking out 647 horsepower and 550 ft/lbs of torque, the car is among the quickest on the planet, reaching 60 MPH from a standing start in just 2.8 seconds and topping out at a mind-numbing 216 MPH.

Just don’t mention Tim’s hair and everything will be okay!