In many industries, most would argue that change is a good thing. Now, obviously this ...

In many industries, most would argue that change is a good thing. Now, obviously this is one broad brush stroke that can’t necessarily paint every situation but if we have the same cars and trucks year in and year out, it would definitely not only be boring but no forward progress would ever be made. With all of the competition that is very much alive in the auto industry these days, I think that it’s safe to say that there’s not going to be any shortage of innovation in the near future. However, it might take people some time to really get used to this innovation. In fact, some of it might even be downright rejected by hardcore enthusiasts and the common consumer alike.

An interesting example of this phenomenon is Ford’s performance division. Now, as an iconic automaker that has become synonymous with cranking out lots of horsepower through their bellowing V8 applications, it came as a bit of a shock when they announced that their highly sought after Coyot platform or any V8 architecture, for that matter, would be nowhere to be seen when rolling out some of their performance vehicles. Instead, Ford would attempt to rewrite a section of their performance heritage, switching things up and trying to move toward the future with the use of forced induction applications in vehicles that would have a much smaller displacement and a couple fewer cylinders.

The ground might have even shaken as some of the community got so worked up over this as they couldn’t figure out why it was that their favorite vehicles in the Ford GT and SVT Raptor wouldn’t even come with the option for a V8. On the other hand, though, many argue that this is a step in the right direction and will definitely end up being for the better when history is set in place. As of now, we can’t really say one way or the other because it’s all so new, however, by following along below the guys at the Fast Lane Truck take us along for the ride with a real Ford Raptor and a replica of the same truck that has been built, by Pax Power, to modern specifications with supercharged 5.0L V8 instead of the EcoBoost application.

Is there any way that the factory EcoBoost unit could come anywhere near living up to the hype that this aftermarket performance beast has to offer? 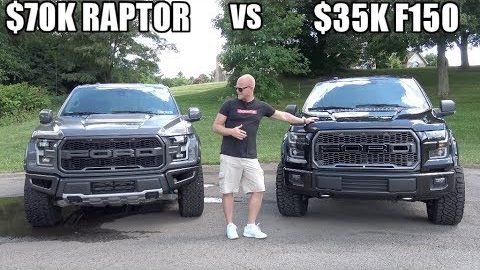