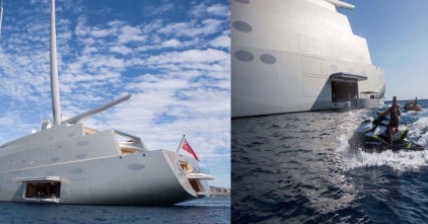 Conor Mcgregor saw a massive sailing yacht on his vacation yesterday and his reaction had us smiling, he posted several times throughout the day about the big boat and we can tell he wants one but $400m is quite a bit beyond his budget even after reportedly earning over $100m after his fight with Floyd Mayweather. He posted a ton of pictures of the yacht almost obsessing over it showing us how no matter how much money we have in life we will always want more.

Here are some of the pictures he posted just yesterday. He was amazed by this sailing yacht and how much it was worth.

“The 360 million dollar “sailing yacht A” pulls up out the back garden this morning . “Sailing yacht A” its called.
That’s how you know the owner doesn’t need to give a bollox about anything.
Sailing yacht A. Most expensive sailing yacht in the world. 360mill. Owned by a Russian billionaire. Google it. Crazy!”

“Quick scope of it before I depart like a pirate towards it.”

“To an even bigger yoke”

“Pretty sure the Russian that paid for this yacht didn’t pay the final bill…. either way nice way to spend $400 million”

“Zoom in little super boat comes out the side camouflaged with the yacht like something out of a bond film. Can’t believe this just pull up.”

“Concept 2 Rower out the back on the second floor”

“That was a mad scene.
I only posted “race to the next yacht” two days ago and then this one pulls up right out my back garden.
The biggest one of all. This is an eye opening level of opulence to witness first hand. To me, it is truly motivating.
I’m starting to think I don’t have a wealth belly just yet. I’m more just rich fat now. I must keep eating.
I wonder if my lunch is ready.”

Here is some footage of the massive super yacht in all its glory. It is truly an impressive ship.