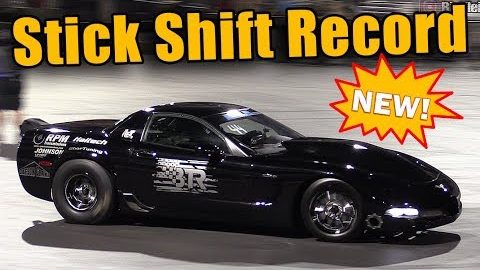 Once upon a time, President Theodore Roosevelt introduced the world to the concept that nothing worth doing is easy. In racing or in life, most things that are the most satisfying come on the tail end of some sort of hard work.

In the stick shift racing community, this concept is especially true. Sometimes, the journey might feel like a thankless endeavor. Stick shift racing is a lot harder on parts. This means a lot more hours wrenching and a far bigger investment. This all comes to a head with some casual who has to remind you that you’d be going faster with an automatic. For those who have really ripped down a drag strip in a stick shift car, though, they know that it’s more than worth it. Plus, it’s twice as satisfying when driving right on past a car that’s shifting itself!

One man who is more than familiar with that feeling is none other than Jared Cocanougher of Race Proven Performance. For those who have been following Jared and his black C5 Corvette, they know this thing is brutally fast. It has been among the heaviest of hitters in the stick shift General Motors community for quite some time now. For Jared, though, just being in the mix wasn’t enough. Having chatted with him plenty of times over the past couple of years, it wasn’t hard to tell that he wouldn’t stop until he reached the peak.

Recently, that black Corvette was able to flip the community on its head. The recent twin turbocharged car came out swinging in 2019. After being stuck at an 8.00-second quarter mile pass after the 2018 season, this year, Jared was able to rocket to a 7.99-second quarter mile. The time spread might’ve been minimal but in the world of racing, it meant all the difference.

That isn’t where the journey would stop, though. Before he knew it, Jared would be taking the combination straight into the record books. The pass would come to the tune of 190.84 mph with a 7.82-second quarter mile pass. After countless hours working on the dream machine, the record would finally fall into his lap.

It seems like it was in the same breath that the car also went up for sale. Below, you can find both the ad and the video of the car downing the record.

$84,000 is quite the chunk of change, without a doubt. We would say it’s also a pretty decent deal to have one of the baddest stick shift cars to ever hit a race track! After watching the video, you can decide on that one for yourself! – BigKleib34