Over the past couple of years, we’ve really seen the half-mile racing format ...

Over the past couple of years, we’ve really seen the half-mile racing format rise and with all of the hot new prospects on the scene today, it could be incredibly interesting to watch the route that this racing format takes. This time, we ride along to the Pikes Peak Shift S3ctor half-mile as 1320Video is on the scene to hopefully watch the Corvette half-mile record fall. You might have seen that Morris Malone behind the wheel of his incredible Chevrolet Corvette ZR1 before, but not too long ago, it turns out that Morris stepped his game up even more.

In this one, we check out the latest and greatest from Malone Racing in a Corvette z06 that doesn’t really resemble too much of its former self and I can’t say that that’s a bad thing because the result is a ton of fun to watch out there on race day. Thanks to A 400ci Dart LSx with just about everything done to it from the crank to the pistons along with two Gen II Precision Pro Mod 88mm turbos, this thing is able to really crank up the power and make some amazing things happen out there on the track as Morris chases down the overall Corvette record of 223 mph and the 217 mph mark held here in the United States.

When Morris begins to tell us all about the setup and starts with the fact that he’s beginning of the journey at 14 psi of boost which creates about 1200 hp and cranking it up from there, you know that this thing is going to end up being a blast to watch. The first time that the car was out, it managed to muster up a 199 mph pass before any tuning was done. This time, the goal is to dial in somewhere in the 200-205 mph range. Will this insane machine be able to crack open expectations and chase down that record? Follow along in the video below to find out for yourself. This is definitely some adrenaline pumping action brought to you by the half-mile at Shift S3ctor. 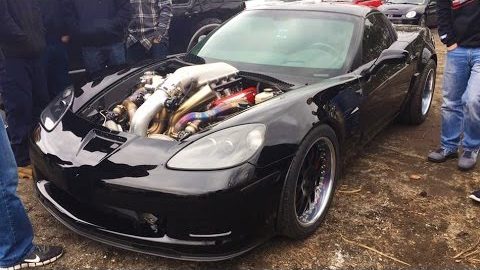