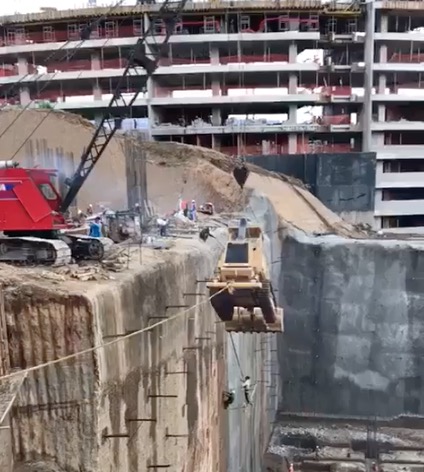 There’s only one word to describe this video: SCARY! If you need a good, intense, Monday morning wakeup, here it is!

There is no information about where this incident takes place, but it seems everybody in the clip is speaking Spanish. Of course, with more than a half a billion people around the world speaking Spanish as their native tongue, this video could have come to us from anywhere.

To set things up and give you a little context, we have a large crane that’s being used to hoist a massive yellow bulldozer out of a deep pit. Seems simple enough, though it’s no secret that dozers are heavy and cumbersome, and without knowing any more specifics about weight and capacities, I can’t really say what caused the failure, but there is certainly a failure of epic proportions that took place just a few seconds into the clip.

With the dozer around halfway up the sheer vertical wall, the crane seems to be handling the load just fine slowly easing the payload up toward the top. However, with no visible warning, the crane suddenly begins to tip forward, and once it begins tipping, that’s all the wrote. With no way of stopping the momentum once the crane’s boom starts tipping, the operator is helpless to do anything but hang on tight and hope for the best.

It’s not clear if there was anybody inside the dozer, but it seems unlikely that would have been the case. Though if you watch Discovery Channel’s Gold Rush, you’ve likely seen some sketchy situations involving dozers and other heavy equipment that may leave you wonder if it’s at least a possibility. If you look closely, you can actually see people hanging from ropes or cables beside the dozer as it falls back to the bottom of the pit, obviously missing being collected by the narrowest of margins by the falling dozer.

I hope nobody was injured in the incident, and hopefully the equipment was able to be repaired.