Cancel NASCAR? Crash At Daytona Takes Out Majority Of The Field. 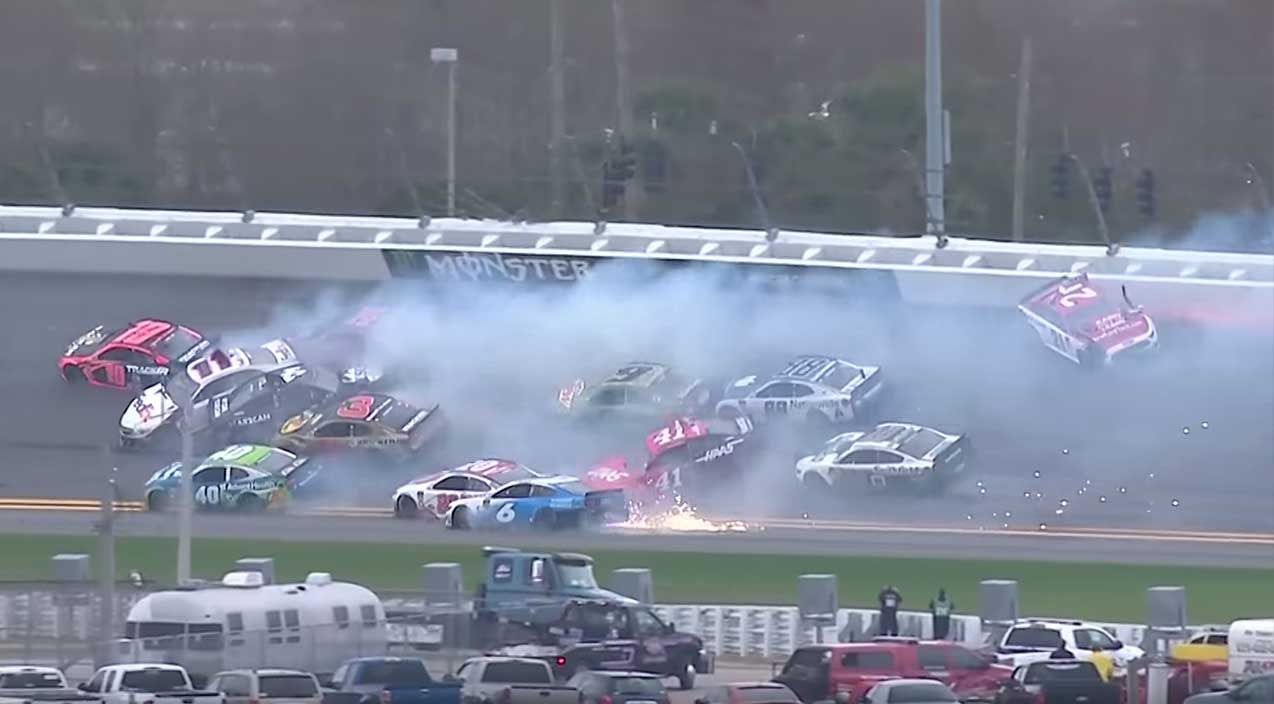 A late race crash at Daytona took out the majority of the field at Daytona, do you think NASCAR should cancel the next race? Drama on the race track would unfold in NASCAR’s official season opener this past weekend. The race is known as “The Clash” found itself unfolding in such a way where a pair of drivers would end up coming to contact and before we knew it, the vast majority of the field would be wiped out at once. When Jimmie Johnson and Paul Menard got into tight quarters, Johnson would come out smoothly sailing while Menard’s number 21 car would be sent sliding sideways into the rest of the pack.

Coming out on the other side, only six drivers would remain unscathed. Shortly after the wreck, rain would end the event and Johnson would be crowned the winner. The wreckage that came about, as a result, wouldn’t be the most controversial part of the weekend, though. In fact, there have been murmurs of some thinking that the entire Clash event should be canceled.

Essentially, for those who aren’t in the know, The Clash is an exhibition that comes a week before the first official points race at the Daytona 500. Because the race doesn’t hold as much value without any points at stake or position to be gained, many think that it should be done away with entirely.

Following the race, Kevin Harvick said that he thinks it should be canned citing the fact that the race’s purpose has been lost. When it was formed, The Clash was supposed to feature pole sitters and past winners but has broadened its scope. Essentially, what was once a race that was designed to put all of the fastest drivers in an abbreviated heat has lost its meaning, in a way. It now includes drivers who have yet to earn their keep.

Harvick continued that the race can provide quite the financial burden for teams, as well. In the competition, he noted that several cars were lost in the final wreck at $300,000 each. It’s not difficult to see how that could begin to add up. While the race was listed at having a purse that has levitated around the $1 million mark in previous years, for the past three years, NASCAR hasn’t published exactly what the winner is going home with, cash wise. Perhaps, a cash incentive would be the only reason for teams to take part. Otherwise, it seems like an all risk and no reward proposition that many probably would just rather sit out.

The sport of NASCAR has been quickly evolving and it might not always be for the better. As fans of motorsports, we always want to see more action but there are very valid points against putting on this exhibition run in years to come.

« Is Buying A Inflatable Spray Booth From China Worth It? Debunked!