Crazy Rednecks Ties To Move A Mobile Home With His Pickup Truck. It Didn’t End Well

Crazy Rednecks Ties To Move A Mobile Home With His Pickup Truck. It Didn’t End Well

We’ve seen a lot of crazy rednecks try a lot of crazy things, but this one might be the… redneckest? That may not be proper English, but we’re gonna roll with it.

Here in the south, mobile homes are about as common as house flies, with mobile home communities – or what most of us know as trailer parks – peppering the landscape all over the Southeast. Sure, there are mobile home parks elsewhere, but it seems like there is just a greater concentration here.

Sometimes, these trailers have to be moved. While there are companies that specialize in this, everybody knows we are more of the “Just hold my beer, I got this.” type of people. As you might imagine, this leads to a lot of awesome outcomes, annnnd even more fails. Luckily, even those of us down here in the backwoods have gotten our hands on cell phones with cameras and have learned to use them to record many of these moments.

I’ll tell you now, I’m not 100% sure what model truck this is. I’ve zoomed in and replayed this video several times, but I cannot get a definitive view. I believe it’s a Dodge Durango, but do not hold me to that if it’s another model. Regardless of what it is, the driver should have gotten the hint that it was a bad idea when he lowered the trailer’s tongue onto the hitch of his truck and the bed immediately buckled.

However, nobody ever claimed we were brilliant, so the driver went ahead and lowered it the rest of the way down, disregarding his bowed up truck, and hopped in the driver’s seat anyway. However, as soon as he gives the truck some gas, it becoming heartbreakingly clear that it doesn’t have the torque needed to haul this house, and the guy behind the wheel gives up pretty quickly.

I would imagine these folks would have to call in, at the very least, a full-size diesel pickup to haul this thing, but ideally, a small semi used just for this purpose would be used. 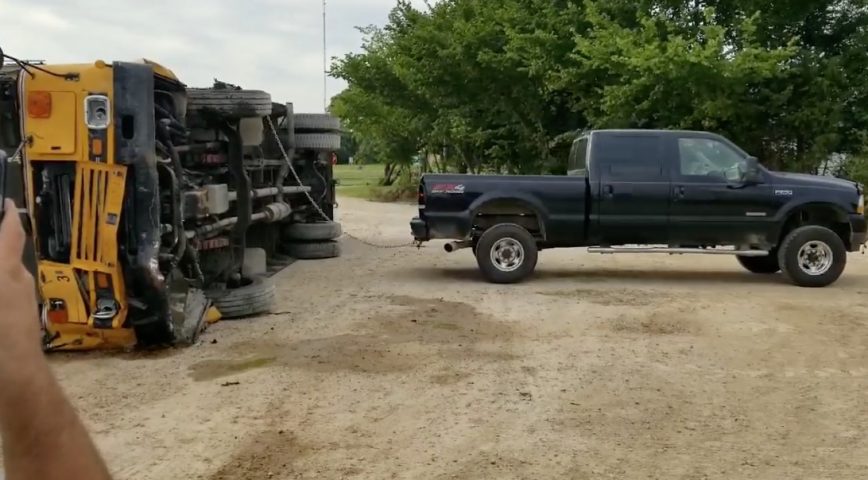