Cummins Powered Bronco Is Most Unlikely Underdog Of SEMA 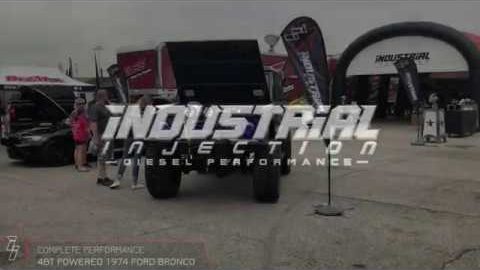 What a gearhead hears about the SEMA show, it’s really something that can make the hair on the back of their neck stand up. Essentially, the show is designed for everybody to break out the big guns. This is where builders really have their chance to show the world what it is that they’re made if. This means that everyone is stretching out their ability to its maximum potential along with taking risks and trying new things. Hopefully, these new endeavors will allow them to stand out from the pack, as well. When all is said and done, it certainly calls for some interesting combinations that make their way to the forefront.

This time, we check out a Ford Bronco that was built for 2017’s rendition of SEMA. Now, this isn’t just any SEMA vehicle but one that certainly has an interesting story behind it. It’s a combination that you’ve got to see. Essentially, the 74 Bronco is anything but typical. Under the hood, we see Cummins diesel power and that’s only where the fun begins. Just about every last component attached to this thing is custom. The top it all off, it was all completed in about two months by builders who say that they’ve never really tackled any sort of complete overhaul quite like this one.

By following along with the video below, we get the rundown of the Bronco along with getting up close and personal to see what this thing is all about. In addition, we get a pretty neat underdog story of how the truck definitely took some twists and turns on its way to becoming a pretty surprising magazine cover vehicle. Hearing about the owner’s reaction to the SUV taking the cover is certainly something that can put a smile on the face. We’re loving it!