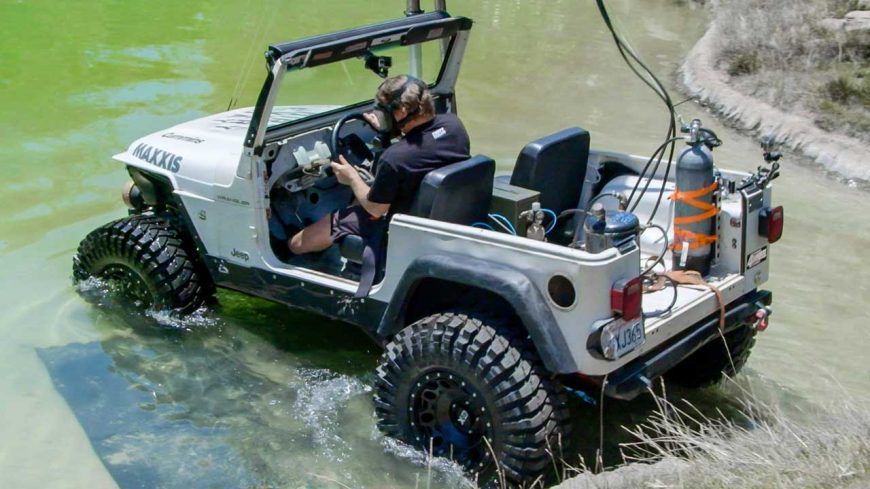 If you really put yourself to the task, there are virtually no limits to what you can accomplish when it comes to off-roading in the vehicle of your choice. You don’t always have to ask yourself why you’re doing it, but ask why not?

This time, the question at hand was whether or not a machine built to tackle the elements could tackle all of the elements at once(we’re talking really pushing it to the limits, here). Could a Jeep possibly make it 12-feet under water and cross a pond while doing it?

Well, there is only one way to find out and find out is what we did when we checked out this segment from the guys over at Motor Trend when they put the question to the test. Many people have nearly completely submerged their Jeeps for a second or two to get through some intense terrain, but who else has driven over 12 feet without getting air. The only thing wrong with Jeeps generally are the lack of power, but with a Cummins this ride is ready to roll. Now they just have to figure out how to drive across the bed of a pond while fully submerged. Not just barely where you could pop up for air, but 12 feet down..

We watch as the Cummins powered Jeep drives under the surface of the water with the aim of traveling to the other side. At first, the ride would get stumped, but upon a second attempt, the results would change up just a little bit. Things generally don’t pan out well the first time you attempt something new. Try and try again they say, so they did! This just shows that you should never let failure stop you from achieving your goals.

Check out the video below to see how this miniature monster does when it goes way down below and takes a shot at becoming amphibious in a way that you never thought possible.

« How Long Do Tesla Batteries Last? One of the Oldest Models Gets Tested