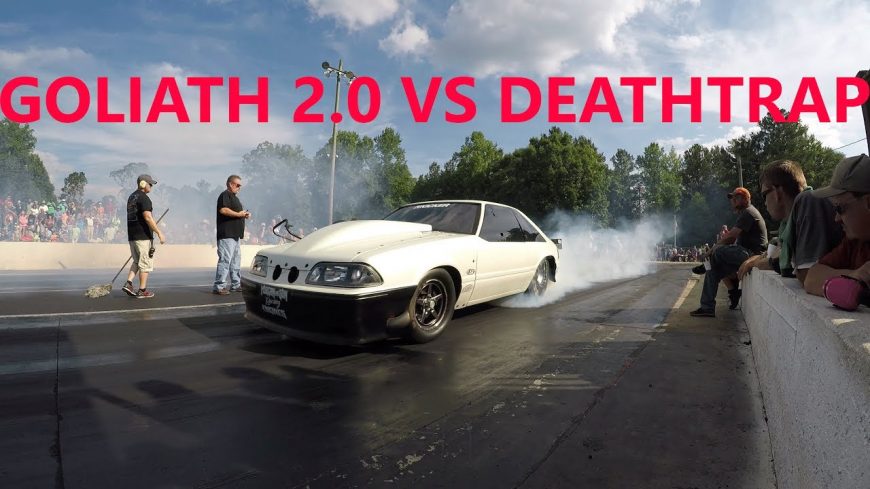 Two of Street Outlaws biggest stars, Daddy Dave and Chuck, have got a nice little rivalry going and they’ve taken the show on the road, traveling to tracks throughout the Southeast to race one another for countless fans of the show. They recently headed down to Holiday Raceway, one of the very first tracks I ever attended as a photographer, to line up with one another yet again to see who could tame the track, located between Birmingham and Tuscaloosa, the home of the finest college football program in the nation.

The footage of this particular showdown was caught by YouTuber BamaMopar, who opens the video with a great, in-depth walk around of both cars, giving us a nice look under the hood of tow of the 405’s Top 10 baddest cars. We get a great look at Dave’s Goliath and the massive ProCharger under the hood, feeding the 540″ big block Chevy tucked neatly between the frame rails. From there, we’re treated to a nice close-up look at Chuck’s Deathtrap Mustang and the twin turbo small block that powered it to the #1 spot on the most important Top 10 list in all of street racing.

When the pair lined up for their first race, Chuck took the win in a great side-by-side race. Dave then raced a local racer in his ’63 Split Window Corvette. Dave spotted the ‘Vette a car length head start and drove around him to take the win. Finally, Chuck and Dave lined up once again, and Chuck took the second race as well, although it was so close the crowd had to wait on the win light atop the scoreboard to know for sure who took the win. These guys put on a great show everywhere they go, and as you can see, they drew a huge crowd to the picturesque little track. Hopefully they come back soon and bring another big crowd with them!