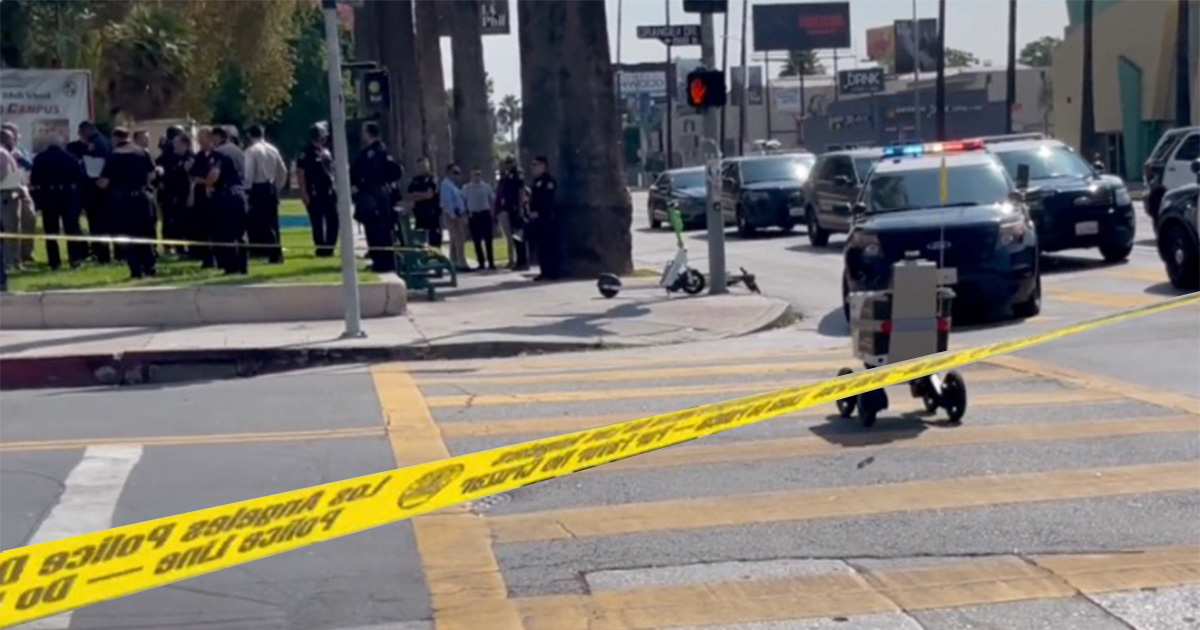 Food Delivery Robot Crashed a Crime Scene The autonomous robot plowed through a suspected shooting at Hollywood High School in Los Angeles.
A self-driving food delivery robot did not take kindly to the yellow caution tape surrounding a crime scene in Los Angeles as it plowed through the area, according to a video shared on Twitter Tuesday.
William Gude is the owner of Film the Police LA, a watchdog Twitter account documenting police activity in the Los Angeles area. Gude was on the perimeter of a suspected shooting at Hollywood High School at approximately 10 a.m. PDT when he saw a food delivery robot rolling down the sidewalk, approaching the yellow caution tape delineating the crime scene.
“I just saw it coming and I couldn’t believe what I was seeing,” Gude told Gizmodo on the phone. Gude explained that the robot kept trying to aggressively maneuver around the tape until a cameraman lifted it up to let the robot through. The robot then made its way through the active crime scene at the high school, passing by a group of Los Angeles Police Department officers. “I thought to myself ‘What did I just capture?’” Gude said. LAPD did not immediately return Gizmodo’s request for comment.

Gude said that he sees these robots pretty frequently in his efforts with Film the Police LA, explaining: “I have these encounters and generally they’ve been funny. [The robots] have names and stuff. That’s creepy.” The scene at Hollywood High School yesterday could certainly be called dystopian: Officers were directing the crowd, which included parents with children at the school, across the street as the robot rolled through the cluster of officers.
The robot is a piece of machinery from Serve Robotics, an independent company that spun out from Uber in 2021 following the company’s acquisition of Postmates the year prior. Uber Eats announced that it would begin testing autonomous delivery using Serve Robotics models in Los Angeles last May, but Gude couldn’t confirm whether or not this particular robot had an order in it.
“Serve’s standard operating procedure is to reroute and not cross barrier tapes; however in this instance, the robot supervisor believed they were being waved through. We’re taking steps to ensure our operating procedures are followed in the future,” said Aduke Thelwell, a spokesperson for Serve Robotics. It turns out that the delivery robot was not fully autonomous when it crossed into the crime scene. “While Serve robots are capable of operating autonomously in most circumstances, they are assigned to human supervisors to ensure their safe operation. This incident was the result of human error in navigating a blockage.”

As humanity continues to advance technology ever so slightly towards self-driving cars and food delivery robots, the road to the successful integration of autonomous robots into our society—should that ever happen—will be paved with mishaps just like this one.