We have gotten to a point in time where tires are rather simple to replace. By ...

We have gotten to a point in time where tires are rather simple to replace. By yanking the wheel off of the vehicle and slapping it on a tire machine, it’s usually only a couple of minutes before the old rubber is removed. It then follows that in a couple of more minutes, the new tire can be installed with ease. However, just like anything else, even the effectiveness of a tire machine can find a way to get better. For some creative minds that approached the problem, they would end up coming up with a solution that really would take the concept and make it mobile.

Sometimes, when it comes to a big truck, it’s not as easy to remove the wheel. When dealing with all sorts of weight and sometimes more moving parts, working on something like an 18-wheeler can actually be more of a hassle. Things get even more difficult when throwing in the fact that many times, maintenance needs to be done on the side of the road.

Therefore, it might even be a lot easier to be able to replace the defective tire while still on the truck. This might seem like something that’s a bit complicated to accomplish but with a device like this, we’re able to see the mobile tire change come to life. Something like this could really prove to be a game changer and ends up saving a lot of time and money along with labor.

By following along with the video below, we get to check out Torq Mobile Tire Service in action as they use a “TireSpyder” to remove a tire from a wheel without even dismounting it from the truck. For a trucker who happens to be stuck on the side of the road somewhere, this could really come in handy. After all, it would remove the need to end up towing the truck to a service station. The sort of convenience is certainly something genius.

This Lady Changes Tires In A Dress, She Is Hired! 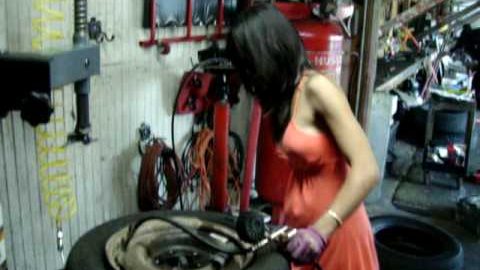