This Dodge Demon Has Had Its Limiter Removed! Just Wait Until You Hear The Flyby (NEW RECORD) 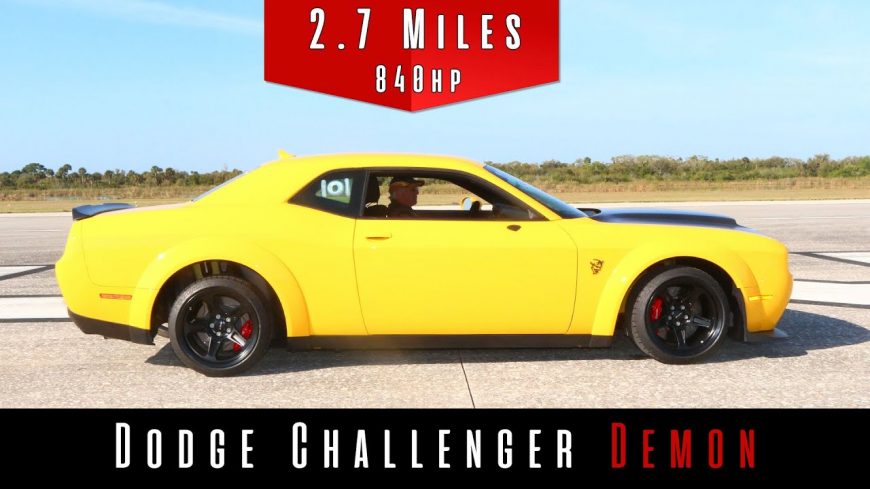 Just when we thought that the Dodge Demon was done pulling things out of its bag of tricks, yet again it comes through and surprises us. Now, obviously, this is a car built for the drag strip. Normally, this means that it can accelerate pretty quickly and achieve great speeds in a quarter mile. Beyond that, though, it might run out of breath. After all, gearing is a big part of why a car can dominate in a given span of track. In recent testing, we’ve found that the Demon actually has some legs beneath it past a traditional drag racing surface.

Down at the Johnny Bohmer Proving Grounds, the Demon has recently shown its stripes, claiming a new top speed. Originally, Dodge touted the theoretical top speed at 186 mph. This was a number that came with the factory limiter. However, it was shortly after found that, with the Demon crate intact, that number was absurdly low. The Demon would manage 203 mph instead. That was a far cry from the original prediction.

By following along with the video below, we watch as the Demon is able to pull off a new personal best! This comes to the tune of a 211.227 mph acceleration in 2.7-miles. The team also noted that this top speed comes with a sense of stability. When cars begin to approach speeds that near 200 mph, usually, it can turn out to be a pretty turbulent ride. However, we’re told that the Demon had no turbulence in sight. It’s also important to note that this number falls right In line with the likes of the McLaren Senna and other supercars. For those who were under the impression that the Demon doesn’t deliver supercar levels of performance, maybe it’s time to reconsider. It certainly seems like when tire hits the pavement, this thing is world class.