Dodge Doesn’t Make a Fast Wagon Anymore, So This Guy Fabricated His Own Hellcat Powered Magnum!

Dodge Doesn’t Make a Fast Wagon Anymore, So This Guy Fabricated His Own Hellcat Powered Magnum!

Back in the day, the Dodge Magnum wasn’t exactly a car that was incredibly ...

Back in the day, the Dodge Magnum wasn’t exactly a car that was incredibly popular. Sure, there was enough of a following to keep it going for a couple of years. However, long-term, the machine wouldn’t happen to be in the plans for Dodge. Instead, it would be discontinued, becoming nothing more than a memory for those who appreciated the run of the Magnum from 2005-2008.

Fast forward to 2020 and anybody looking to get their hands on some sort of a go-fast Dodge wagon is going to have two choices. First, they will have to settle for a late model example. If that’s not in the cards, the second option is to get down to the grind and create one for themselves. This time, we tune in with an individual by the name of Junkyard Dave on YouTube who decided to do the latter.

When the specific car that he was looking for wasn’t on the market, he got to work. After spending some time at the drawing board and coming up with a plan, this plan would be put into action. Using the base of a Dodge Charger Hellcat and combining it with a little bit of know-how, he would get to work.

Down in the video below, we get to stop in with the progress that shows how all of these factors coming together. One step at a time, the Charger has been transformed into the wagon that dreams are made of. After taking one good look at this thing, even though it’s not exactly finished just yet, we can’t help but wonder why Dodge has dropped the idea of the wagon altogether.  We would assume that it probably had to do with the popularity of the configuration but after taking a look at how slick this thing is, maybe there will be some second thoughts at FCA.

This Kid Swapped a Hellcat Motor In a 1969 Dodge Charger! 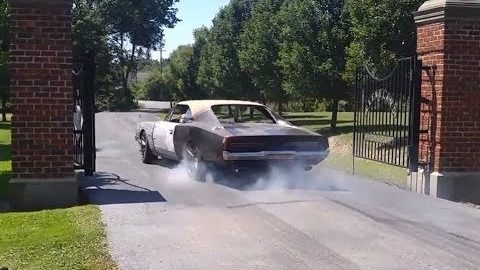