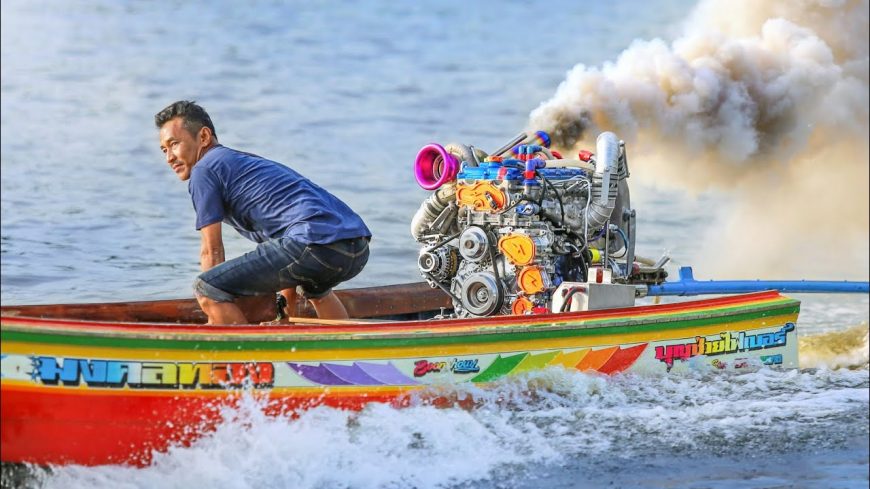 400 hp doesn’t seem like much when we think about it in the context of a car. After all, the lightest of factory automobiles probably sits around 2,500 lbs or so. With that in mind, 400 hp is only going to take someone so far. However, if we change up the context just a little bit, a simple 400 hp could seem like an absolute rocket. Anything beyond that might even be considered overkill.

In this particular situation, we follow along with a staple of the Thailand motorsports scene. With the help of a collection of different engines, longtail riverboats can seem like the biggest adrenaline rush imaginable. The things couldn’t weigh any more than a couple of hundred pounds. In some situations, they can make the aforementioned 400 hp or more, though… Talk about an insane power to weight ratio!

When watching the video, we can’t help but get a little bit of an adrenaline rush as we watch some new forms of drag racing come to life. As a selection of boats are powered through the water, they definitely provide us with a sketchy adrenaline rush. Who would’ve ever thought that there was a competitive boat scene like this out in Thailand? Some of these competitors are really laying into it!

With the rest of the video, we get an inside look at what this culture has to offer. It’s pretty crazy how they make do with the situation at hand. Thailand probably doesn’t have all that much wide open space for typical racing. However, because they have all sorts of water around, something like this makes magic happen.

With the help of CB Media, we get quite the inside look at how it all works. We can’t tell if these guys are genius or absolutely insane. Perhaps, it’s some mix of both that’s making this magic happen. No matter what way we slice it, though, it’s a ton of fun to watch unfold.