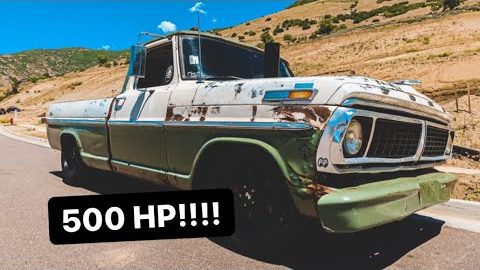 Back in the day, pickup trucks were very function-oriented. They were designed to have a handy bed to throw some things in but beyond that, their capability was rather limited. Back in the heyday, they were still much more functional than other machines on the road. However, these days, we see some different options that really expand that capability.

Strictly on the function side of things, different powertrain combinations really bring these trucks to life. From diesel engines to much more potent small-displacement gasoline engines, there is a lot to consider when buying a truck. From a functionality standpoint, pretty much all of today’s options would stomp all over what was available when the Ford F-100 originally came out.

This time, thanks to Lacey Blair, we’re able to take an adventure on her YouTube channel to check out an old school Ford that has been brought into the modern era. With the help of a 7.3L Power Stroke diesel engine, this truck is rolling hard!

Throw in a little bit of patina and a hood exit exhaust and the cool factor is rather apparent. After watching the video that showcases the slammed truck plowing through the streets and rolling a little bit of black smoke, we can’t help but want to wheel this bad boy around.

There’s something about these custom diesel pickups that really offer a unique allure. After checking in with the video below, be sure to tell us what you think of this custom build. No matter where the driver is going to go, from a car show to the highway, this thing is sure to turn some heads. We think that calling it “Something different” would be a bit of an understatement. Throw in the improved performance and the ride really is the complete package.