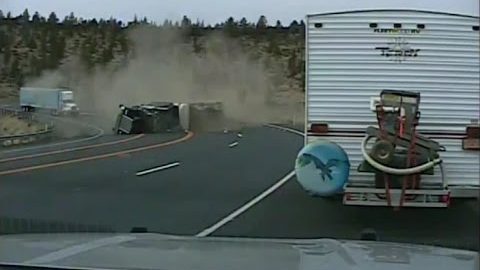 If you’ve ever been rolling along the roadways and saw warning signs for bigger trucks that suggested they stick to incredibly low speeds to prevent a rollover and wondered how realistic the chances of that rollover really were, this video will bring some light to your world.

This time, we catch the scene of an accident as a dash cam is rolling on a vehicle sitting by the side of the road that watches the scenario when a dump truck comes rolling around the corner and momentum gets the best of it as the machine simply can’t keep all four wheels and tires planted on the ground.

If you didn’t know it was coming next, well, the inevitable unfolded as the top of the truck would just keep on going faster than the bottom, causing a catastrophic situation that set the truck on its side and all of its cargo flowing out into the street. Check out the video below that shows off the scene when this driver got in a little bit too far over his head with a load that ended up being scattered everywhere.

« Street Race in a Tunnel Turns into Violent Crash!