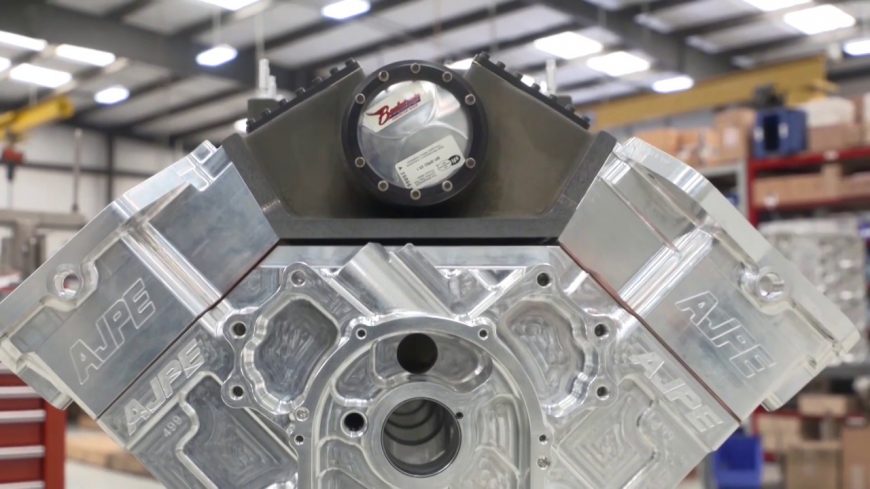 NHRA put together an inside look at the literal kings of speed, the fastest-accelerating and most powerful cars on the planet, Top Fuel and Nitro Funny Car, focusing on the insane powerplants that push these cars from a standing start to 340 MPH in less than four seconds.

Everything inside a top fuel engine is designed for power. From the carbon fiber injector atop the massive supercharger to the crankshaft spinning away inside the block driving the pistons through the cylinders to create the most intense cylinder pressures imaginable.

While the engine only has to survive about 460 revolutions under wide open throttle, they run so close to the ragged edge of performance that they don’t always make the full 1,000 foot run intact, and when they come apart, the carnage is often spectacular. For these engines to crank out over 1,000 horsepower per cylinder – read that closely, that’s over a thousand horsepower per cylinder – they have to drink over a gallon of fuel per second, and these things don’t run on 93 octane you can get at the local 7-11.

It’s said nitromethane won’t ignite if you drop a match into a pull of it, but will explode if you smack the same puddle with a hammer. Couple that volatility with those insane cylinder pressures and you’ll understand a huge part of the key to cranking 11,000 horsepower out of a 500 cubic inch engine that, as far as technology goes, is a bit of a dinosaur. However, when it comes to building power, you use what works, and the decades-old heme-style head is the go-to for these cars to power them to the fastest speeds this side of land speed racing in a distance that’s a fraction of those used by LSR competitors.

Hit that play button and check out this amazing footage from the NHRA and learn all about the most powerful racing engines on the planet!