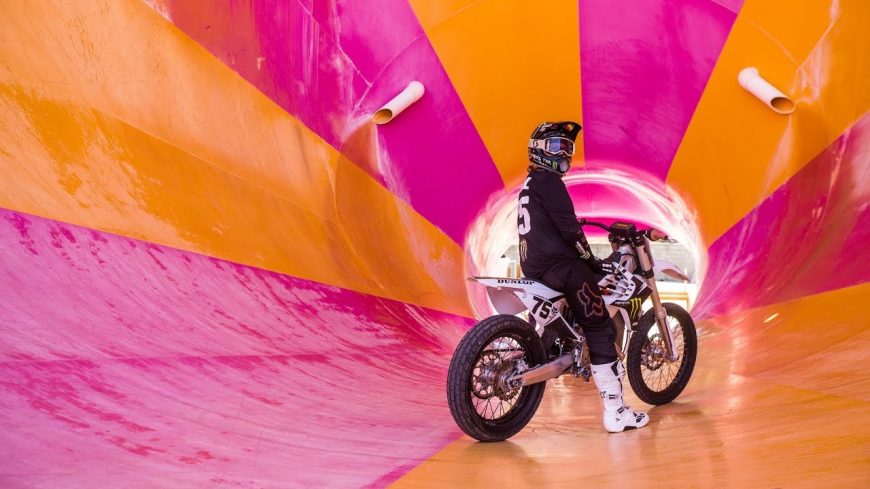 Sure, we’ve seen stunting on a motorcycle before. In fact, we’ve seen about a million motocross riders doing a little bit of freestyling. We definitely have a high level of appreciation for these guys. However, I can’t recall that I have ever seen any sort of stunt riding like this. That’s not necessarily taking away from anybody but the way that Josh manages to make the most of this environment is just so awesome that we can’t take our eyes off of it.

How this dude manages to keep himself together to try out half of the stunts pictured here is really beyond me. I guess it takes that “don’t look down” mentality to the next level. Things get more and more intense as Hill keeps on climbing and seemingly defying physics along the way.

After each stunt, we have to keep telling ourselves that there’s no way that he could possibly top the display just pulled off. Lo and behold, upon the next stunt in line, he ends up doing just that. This rider really outdoes himself, pretty much doing all that a bag of chips along the way. Some of them get a little bit intricate as he carves through slides and other abandoned water features. They definitely throw a twist in the mix that takes the display to the next level.

Follow along in the video below that shows off what might be one of the most acrobatic displays we’ve seen. We have to warn you, though, because checking this one out my just give you a little bit of vertigo. As you watch the bike climb higher and higher, things tend to teeter on the edge a little bit. After checking this one out, be sure to tell us what you think of this highflying motorcycle rider who really does his best to put on quite a display.