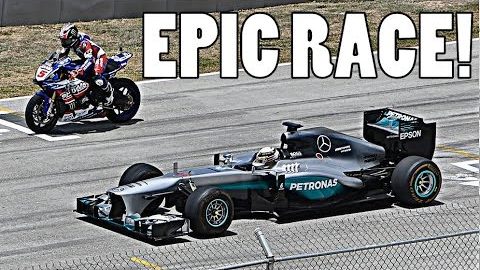 Superbikes are some of the fastest vehicles you’ll ever find on a road course. The highly skilled riders are able to fling their bikes side to side as they lay out in the corners, fighting physics to keep the tire hooked up as they push the limit through every curve and straight. However, as badass as they are, this video proves they’re just no match for a Formula One car.

Of course, when the man behind the wheel of that F1 ride is none other than multi-time world champion Lewis Hamilton, the odds are truly stacked against the superbike. The exhibition, meant to be more for fun than anything, starts with the bike getting a bit of a head start before Hamilton unleashes his Mercedes F1 car. Within a few seconds, Lewis is all over the bike’s back tire as they get into the first turn. From there, it becomes more and more obvious just how much more capable the Formula One car is than the bike. It doesn’t take long for Hamilton to overtake the bike, which honestly looks slow in comparison to Hamilton’s ride.

Lewis slows and lets the bike back around him a couple of times, only to slide back around him at the next opportunity. They spend a couple of laps playing this cat and mouse game before Hamilton cuts the bike loose and does some donuts for the fans. This was a great exhibition that showed just how insane these cars are. It’s well known that they are the most technologically advanced cars in the world and you can definitely tell as they scream around the track.

Thirty-two year old Hamilton is considered by many to be one of the best to ever take the wheel of an F1 car, having won three world championships, thanks to his 57 wins and 67 times sitting atop the qualifying sheet. You can tell he has masterful control of his car even when he’s having fun in it!