If you just so happen to be one of those people who gets subjected to pretty intense ...

If you just so happen to be one of those people who gets subjected to pretty intense winter weather conditions every year, you know just how deadly black ice can be. When you’re rolling along, there’s a good chance that you won’t even see it on the roadway in front of you but, once you hit it, you will very much know that you are now its victim as you find yourself unable stop. Black ice is one of those things that you just want to avoid at all costs if you possibly can but for the owner of this Jeep, strapped up with all of the off-road goodies that you can imagine, it turns out that their entire street was covered with black ice so they tried to take it on.

Even with the big and knobby tires along with the 4×4 system on board of the machine, it appears as if the owner of this Jeep Wrangler just can’t make any progress on the street that’s blanketed entirely with black ice. No matter how slowly or quickly they approach the incline, the Jeep is absolutely all over the place, sliding around like a hockey puck on some freshly manicured ice. As it made its way up the hill a little bit and started sliding back down, we actually had this gut feeling that it was going to do some damage, crashing into a truck or a curb or something of the like.

Follow along down in the video below as the Jeep driver squirms around and can’t figure out a way to make his way up this incredible incline that’s as slippery as they come. Hopefully, the driver didn’t have anywhere important to be because, as of now, it doesn’t look like he’s going to be able to make it out of his own cul-de-sac. 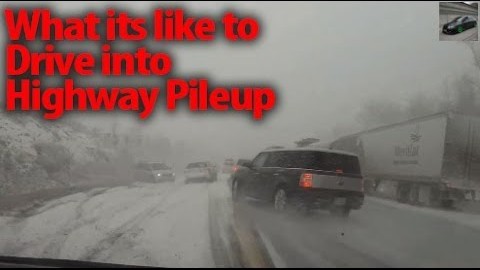