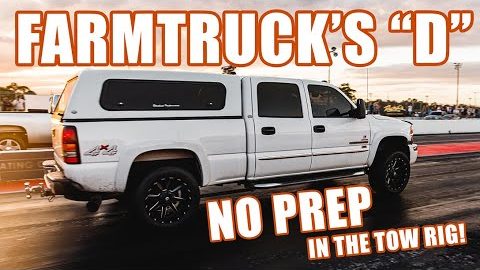 When it comes to Farmtruck and AZN, we can’t help it be interested in everything that these guys are doing. We’ve literally watched and have been entertained by them racing a golf cart.

Outside of their racing machines, these guys do have a couple of other interesting rides. This time, the ride in question is none other than the daily driver. On a regular basis, one might just find Farmtruck wheeling around his GMC Sierra that he calls “D.”

The Duramax powered tow rig has an upgraded turbo and injectors. However, performance isn’t of the utmost importance to this one. After all, it does weigh in at 8200 pounds. We would classify this as a quick and fun daily driver. However, making a statement in a race probably isn’t going to be the main goal of this truck. Team FNA has some other horses in the stable to take on that goal.

However, this is Farmtruck that we’re talking about. We’re pretty sure that if it has wheels, he would manage to find a way to race it somehow. He probably would race a lot of things without wheels as well. That’s a topic of discussion for another time, though.

This time, we follow the truck and FNA to the Season 3 finale of No Prep Kings. In this one, the daily driver is taking on none other than a Power Stroke powered Ford diesel pickup truck. This is an age-old battle that we can’t help but watch every time that it unfolds on the strip.

By following along with the video below from the official YouTube channel of Farmtruck and AZN (we would probably go subscribe if we were you), you can catch the whole ordeal. There’s something about this truck that just makes us want to get behind the wheel! Maybe it’s due to Farmtruck’s inevitable excitement with his victory! – 405 Photo