Fast And The Furious Charger And Supra Race At German “Racewars” 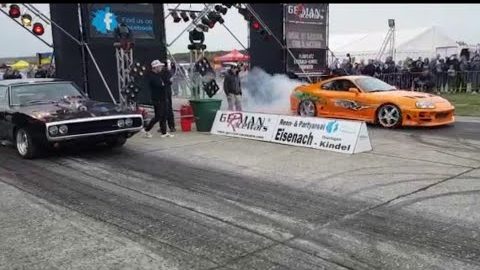 As gearheads, it’s kind of hard to focus on a movie without paying careful attention to the cars. Every detail really needs to be attended to in order to make a movie go over smoothly. If there’s something to pick out, those behind the films can be sure that fans will latch on to it.

Therefore, car selection and build execution are absolutely key. In addition, picking out the exact right car can really change the entire vibe of a film. This is pretty easy to see when we recall just how iconic some of the cars from The Fast and the Furious have gotten.

From the first movie in the series, there were a lot of fun vehicles to sink our teeth into. However, I think that most fans would agree that two really stood out from the pack. This is when Brian’s orange Toyota Supra and Toretto’s Dodge Charger would come to life. In a closing scene drag race that defined the movie, enthusiasts couldn’t help but fall in love with the duo.

Since then, all sorts of fans have been inspired to not only collect these cars but create their very own replicas as well. This time, we watch as a couple of the cars are put to the test.

From what we’re told, the Toyota Supra pictured here is very close to movie spec. The car boasts a 2JZ engine creating 330 horsepower. On the other hand, we check out a later iteration of the Dodge Charger that would appear in Furious 7. The car is actually powered by an LS3 and was used on screen. The Dodge makes a bit more power as it’s rated at 500 horsepower.

How would these cars fair against one another in a real-life drag race? I guess that we’re about to find out in what they’re calling “German Racewars.”

One of the fun parts about this one is that the guy behind the wheel of the supra is actually Craig Lieberman. Lieberman was responsible for coordinating the vehicles in the first couple of Fast and Furious movies. Today Franck from Movie Cars Central is piloting the Charger.

« They Already Slapped Nitrous on a C8 Corvette, Ride Along in the Car While it Rips!