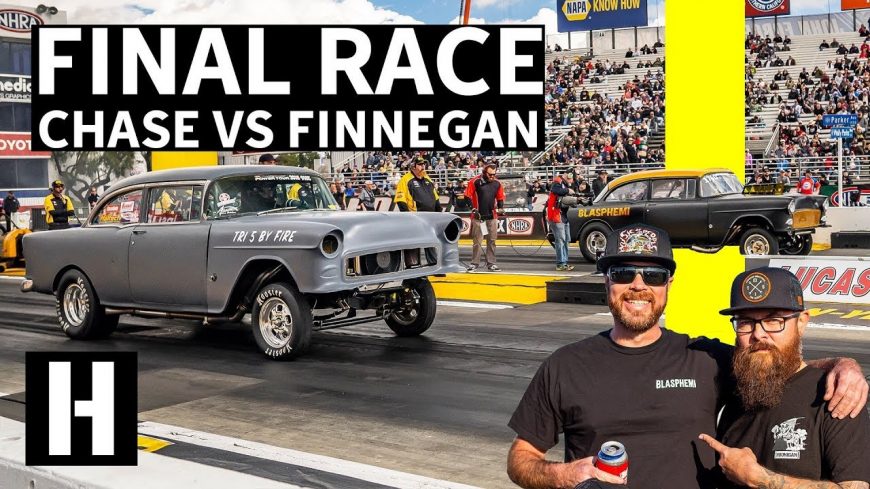 FINNEGAN VS CHASE CALLOUT FINAL RACE! The big Kall Out Kings race between Jon Chase and Mike Finnegan is in the books, and like most of America predicted, Finnegan took the win. However, we have to give Chase a ton of credit for thrashing to get his car together after having the engine apart just a couple of days before the big throw down.

The guys decided to make the race a best-of-three shootout to make things more interesting for the fans. Jon, knew coming into the event that he was down on power, but decided to throw everything he had at it on the tree and hope Finnegan basically fell out of his car and lost the keys. However, the next part of his plan involved swapping engines to his good engine that makes more power between the first and second race and try to hopefully give Finnegan’s Blasphemi. In true Chase fashion, he underestimated the amount of traction available on the NHRA national event track and nearly stalled the engine launching during the first race. He took an L on that run, but got back to the pits to begin the engine swap process, then headed back to Accelerated to dyno it and see what kind of power he would have to try to even the score in the second race.

With the dyno pulls out of the way, they made a couple of test launches in Accelerated’s parking lot, then headed back to the track for round two. With this being a life-or-death race for Chase’s beard, Jon even tapped our very own Leah Pritchett for last minute advice before heading to the starting line. When the cars launched, it looked like Chase was on he way to tying up the score at one race each when something broke in his car, leaving him to do nothing but watch Finnegan streak to the win.

Chase owned up to the bet, shaving his face and knocking a couple of decades off his appearance, but before the shaving cream was even dry, he’d called out Finnegan for a rematch, with the loser of that race having to get the winner’s name tattooed on their body! We can’t wait to see how that goes down!

« Rally Team Continues With Snow-Filled Car After Rollover, Their Commentary is Hilarious