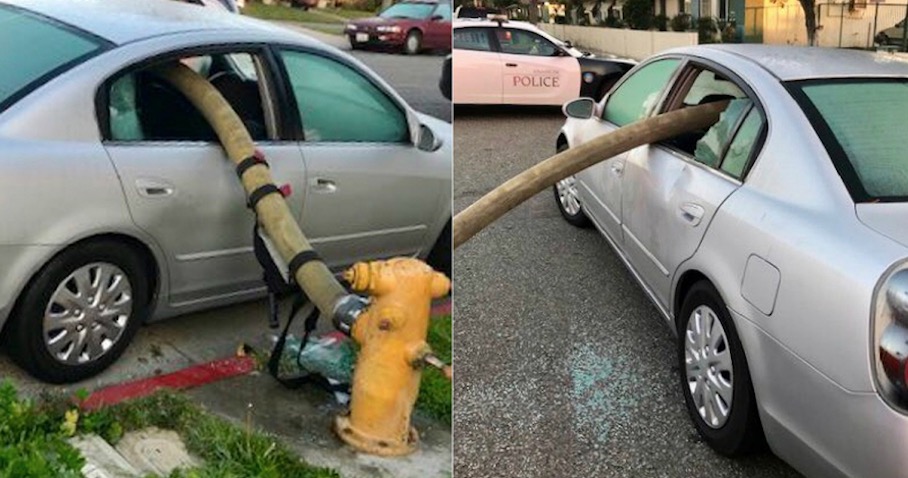 As anybody driving a car should know, parking in front of a fire hydrant is illegal and also pretty dangerous as well. While, most of the time, the driver will probably end up getting away with it, every once in a while, there is actually a fire that needs to be put out and firefighters aren’t really going to care that much about the condition of your vehicle in the process.

In fact, this is a situation that we have seen plenty of times around all corners of social media. As firefighters are in the pursuit of saving lives and aren’t necessarily concerned about your vehicle, they will smash out a window in order to run a hose through your car.

This time, we check in with one particular post of a photo that has gone viral showcasing exactly that situation. As it turns out, though, some Karens got pretty mad on social media and took their hatred out on the firefighters. However, when logic is introduced to the equation, we learn that running the hose this way is very necessary because if the hose was run over a vehicle or under it, this would not only waste time but also inhibits the flow of water. In other words, no decent person is going to let somebody die in the name of your car window.

By following along with the video below, we get to hear from the firefighters themselves who defend the photo showing the car windows smashed out. Millions of viewers have chimed in with different opinions. However, at the end of the day what really matters is that eight people in this particular situation managed to get out of the fire safely. At the end of the day, it’s really not all that inconvenient to find a spot that is legal to park in.