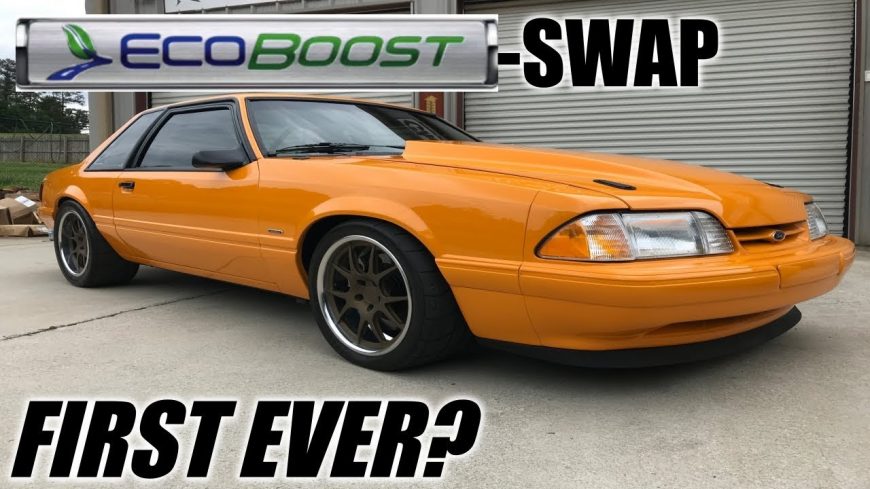 Generally, when we think of an engine swap, we imagine somebody going with more displacement. At times, engine swaps might even slap a different brand under the hood. This time, though, we catch up with a build that is doing none of the above. In fact, we can’t help but love the originality here. The concept really takes a fan favorite in the Foxbody Mustang and brings it into the modern age. A twist is thrown into the mix that really wakes this car up from where it came out of the factory. This comes in addition to improving it in a variety of other ways.

As you’ve probably come to understand at this point, the swap is none other than Ford’s recent EcoBoost line of engines. The 2.3 L turbocharged power plant is backed up by a 6r80 transmission. It’s believed to be the first of its kind and potentially the only completed EcoBoost swap in this body style Mustang. This thing wasn’t just slapped together, either. From head to toe, no stone was left unturned in the pursuit of bringing this Fox into 2019 by Mo’s Speed Shop. It almost looks like what would happen if Ford made a Foxbody today and it rolled off of the assembly line.

By following along with the video below from Foxcast Media, we get an inside look at one of the most insane Foxbody creations that we’ve ever laid eyes on. This car not only does something different but also manages to do it incredibly well. We don’t care if someone is a Ford fan or not! It’s pretty hard to hate on a build like this. The attention to detail here is nothing short of amazing. This Fox is one that most definitely is firing on all cylinders, even though there aren’t eight of them. Follow along yourself and be sure to chime in with what you think!

« Is the 2019 GMC Syclone the Midsize Performance Truck to Buy?