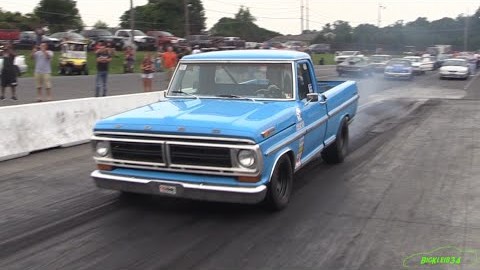 With one look at this truck, there isn’t too much that makes it look like a killer on the drag strip, but the heart of the beast says otherwise.

When this Ford F100 was put together by Ford back in the day, it did a good job of what it was designed to do – hauling around the goods.

While it got it’s original intended job done effectively, the power plant under the hood wasn’t any good to the truck’s new owner. Instead, he wanted something that would tackle the quarter mile with authority.

The result is 427 cubic inches of Dart Chevrolet small block power. The result is an 11-second pass that nobody expected out of the unsuspecting pickup truck. According to the owner, the truck has been in the 10s, but a transmission failure prevented it from doing so this night. Hopefully we see this truck out and living up to its full potential soon enough!

« Ferrari FXX-K vs FXX vs 599XX vs LaFerrari Racing SOUNDS!