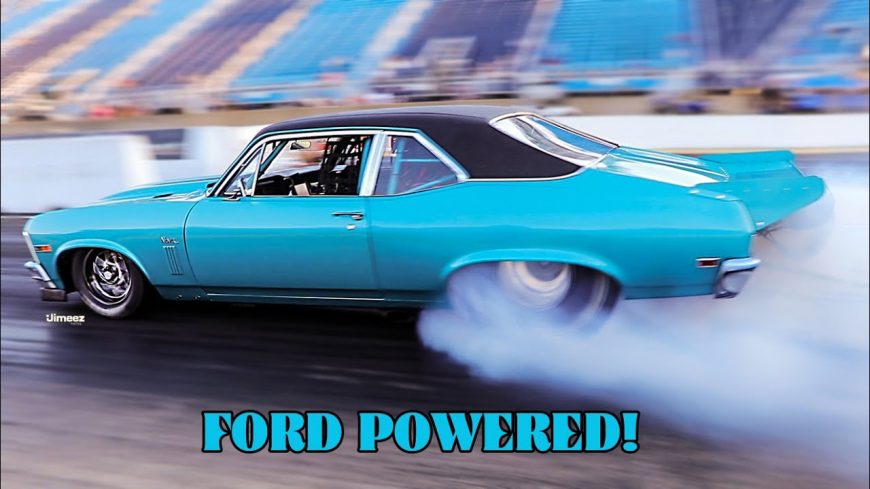 The world of engine swaps provides a mountain of possibilities. No matter what the chassis, we have seen folks really get creative in picking out their power sources. On one hand, there is the tried and true and there’s a reason why that market is so tapped into – it works!

On the other hand, though, there are the people who like to do things a bit differently. When we think of an old school Chevrolet Nova, the swap of choice is likely a late model Chevrolet application. This time, though, that wasn’t in the cards for this bright blue Nova.

This time, we check out a swap that certainly pops from the landscape. While this Chevrolet Nova was impressive, there was one factor about it that really made it a must-see machine. In Pro Mod standing, the Nova really looked like it was swinging a heavy stick. However, what most people on the premises probably didn’t know was that the car was powered by Ford.

That’s right, in the world that seems to only take Chevrolet power plants and stick them in Ford bodies, we saw an engine swap going the opposite direction. I have to admit that even as an LS fan, seeing something like this is truly refreshing. Don’t get me wrong, I can drool over a proper LS swap all day. However, going in the opposite direction gave us a little taste of what we’ve come to love about the engine swap community. There are all sorts of people trying out all sorts of different things during the race.

By following along with the video below, we get to check in with not only a Ford swapped Nova. Instead, it’s a Ford swapped Nova making over 3000 hp. Up until last year’s Drag Week, it was sitting in the corner of a barn as well! This time, though, victoryredcolorado captured the car making a couple of intense 7-second passes!