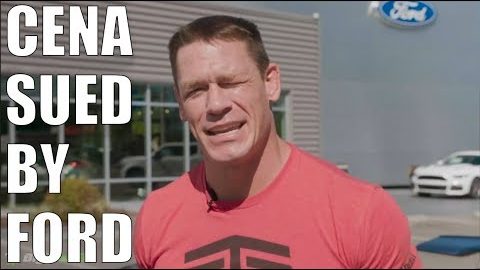 After reading the details of a recent story that has WWE powerhouse, John Cena, in the spotlight, you might just so be more inclined to read the fine print the next time that you sign a contract. Sometimes, whether or not it might be something that pops up in your head, a contractual agreement can have some obscure details. This time, one of those details might just cause one of the biggest wrestlers of all time to have to have to shovel over almost half of $1 million to Ford if the company should carry out the suit and end up pinning Cena for a three count.

According to details from various news outlets, Cena was one of the lucky performance nuts to get his hands on a 2017 Ford GT, Ford’s knight in shining armor as their lone nod into the supercar market. I’m sure that the list of people who want to buy one of these things is incredibly long but Ford decided to only allow certain collectors to be able to get their hands on one. The agreement that these collectors would sign would detail that they hold onto the car for at least two years as to not try and go out there and flip the cars for profit and diminish brand value.

If you’re sitting here trying to figure out exactly what Ford could stand to gain from a lawsuit besides the $460,000 back for the car, their loss of brand ambassadorship from Cena is why they just so happen to be upset in the first place as the selection process for the GT is based around those who will be able to best help build the brand. More specifically, Ford is looking to recoup “loss of brand value, ambassador activity, and customer goodwill due to the improper sale.”

Now, I’m not sure that a lawsuit will sit well with those who are looking to get into a Ford in the future but it’s almost like they’re backed into a corner here. On one hand, they’re right to carry this out because the whole idea behind the car’s release was to get it into the hands of people who could help build the brand. They even made the process difficult to make sure it was people who really wanted the car. On the other hand, though, suing one of your customers for selling your product, no matter what the justification just looks really, really bad.